All About Kalamazoo History

Learn about the history of your library, discover groundbreaking local businesses, dive deep into Kalamazoo’s rich musical and sports history, visit historic neighborhoods, explore commercial buildings and stately homes, and meet the people who helped make Kalamazoo what it is today.

Kalamazoo Public Library received an Award of Merit from the Kalamazoo Historic Preservation Commission for the “All About Kalamazoo History” section of its website, as well as a prestigious State History Award for “outstanding contributions to the appreciation and understanding of Michigan history. 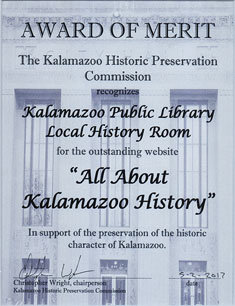 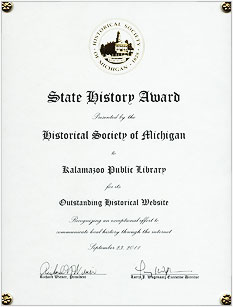