Kalamazoo Day at the 1915 Exposition

Mayor A. B. Connable received exciting news in December 1914 for the city of Kalamazoo and for its manufacturers. The special events committee of the Panama-Pacific Exposition, opening 15 February 1915 in San Francisco, announced that 1 June would be Kalamazoo Day. Known around the world for its celery and paper, Kalamazoo’s industries were to have the honor of serving as the focus for the day at this international event. Kalamazoo was one of only a small number of industrial cities its size selected for recognition at the fair. Western Railways already had special excursion rates to San Francisco in place for the people of Kalamazoo to attend the exposition.

Who will represent the city?

The November election saw Connable voted out of office and James B. Balch elected Kalamazoo’s new mayor. Late in May, Balch asked for the names of residents planning to attend the exposition in San Francisco. Mayor Balch wanted to make a list from which he would select an official representative for the city at the exposition. People who chose to be on that list were to give their names and addresses to the mayor’s office or to the Gazette which would deliver them to the mayor’s office. Balch also wanted the names of former Kalamazoo residents living in California, with the hope of enlisting their help with arrangements.

With no time to waste, Balch made his selection.  The official representative selected was Prof. James A. Starkweather, principal of Woodward Avenue school. Starkweather’s first task was to contact the exposition’s special committee to delay Kalamazoo Day until sometime between 2-7 July.  Within two days, Starkweather announced the new date of 6 July. Mayor Balch then contacted William Longyear and C.E. Linsey, former Kalamazoo residents living in California. They respectively served as the president and secretary of the Michigan Society of California, and agreed to help with arrangements and the program. Balch asked Kalamazoo’s Chamber of Commerce to help by selecting representatives from the prominent manufacturing industries to go and distribute literature. The departure for Starkweather and those wishing to travel with him to San Francisco was set for the 26 June from Chicago on a train decorated with Kalamazoo streamers. Accompanying Prof. Starkweather and his wife were: 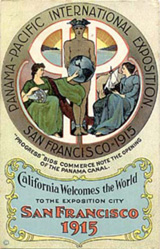 On the day Starkweather’s group left Chicago, Balch described the plan for a unique program. With the help of E.P. Platt and A.W. Robb of American Telegraph and Telephone Company, George B. Pulfer, president of the Kalamazoo Rotary Club arranged for a long distance call from Kalamazoo to San Francisco on the new transcontinental cable. The cost to use this new technology was $5.45 per minute. However, by allowing a representative of the state phone company to present a brief history of the transcontinental cable at the event, Kalamazoo’s use was free of charge. The Rotary Club presidents of Kalamazoo and San Francisco were to serve as hosts of the phone call. In Kalamazoo, the Rotary Club members were to host 55 residents to a lunch at the Park-American Hotel 313-325 E. Main.  A phone receiver sat at each table so that all could hear the conversations. In San Francisco, there was a similar set up in the Liberal Arts Palace at the exposition.

At noon on 6 July, George Pulfer initiated the call to San Francisco and exchanged greetings with the California governor’s representative. Originally, Michigan Governor Woodbridge N. Ferris was to be in Kalamazoo, but neither governor was able to attend. From Kalamazoo state and city representatives prepared to speak with their counterparts or a representative in California. In Kalamazoo, Congressman J.M.C. Smith stepped in for Governor Woodbridge to pass official greetings from Michigan to California. Mayor Balch did not get to speak with the mayor of San Francisco, but received high praise from the latter’s representative on Balch’s stance toward the importance of “municipal ownership.” Balch also spoke with the Panama-Pacific’s vice president who thanked him for Kalamazoo’s representation at the exposition. Prof. Starkweather and his wife spoke with Balch and described the journey and involvement at the exposition. Dr. W.E. Upjohn represented the Kalamazoo Chamber of Commerce and spoke with a San Francisco C of C member, while Walter Blinks, Kalamazoo’s assistant secretary of the General Gas Light Company, spoke with a San Francisco representative of the company. It was not all business though. Michigan Senator, William Alden Smith of Michigan, through a special connection, was able to speak with his 80 year old mother living in Santa Anna, California and Frank H. Bowen, manager of Lee & Cady, spoke with a long time friend living in California. The San Franciscan hosts then sang, “I Want to Go Back to Michigan,” and caused even those at the Park-American Hotel to join in the singing. A rousing rendition of “Dixie” from the San Franciscan concluded the call. 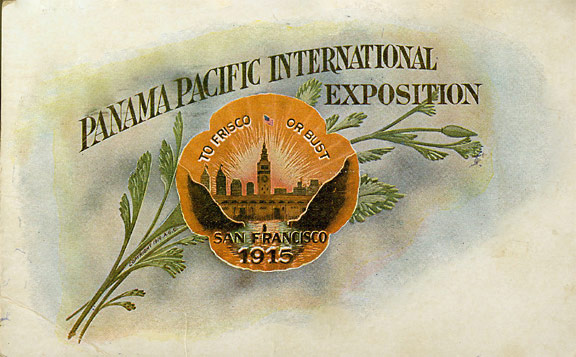 The 1915 Panama-Pacific Exposition, like all world’s fairs, displayed the latest scientific innovations from the U.S.A. and countries around the world. Kalamazoo’s industrial success in the local, national, and international markets made it deserving of special recognition at the exposition. Kalamazoo was an economic leader with such companies as the Kalamazoo Stove Company, the Upjohn Company, and especially its paper and celery industries. The free 3,000 mile transcontinental phone call between Kalamazoo and San Francisco further demonstrated the importance of the city in both the Michigan and U.S. economy.

“June 1 will be Kalamazoo Day”

“July 6 is dated as Kazoo Day at fair”

“This is Kalamazoo Day at exposition”

“Kalamazoo Day at fair is auspicious”