First Saturday at the Alma Powell Branch Library
Walking Tour of Mountain Home Cemetery
Step Back in History: KPL at 150

“A Kalamazoo Direct to You”

Stoves by the Thousands

“A Kalamazoo Direct to You.” With this catchy sales slogan, the Kalamazoo Stove Company warmed the hearts and kitchens of millions of American families. Bill Branche, an editorial columnist for a New York newspaper, wrote: “Our Kalamazoo radiated warmth, and not just the warmth of combustion – stoves like that had character, they were a presence in a room that a neat, efficient gas or electric range can never be. My mother isn’t the only one who misses it.” 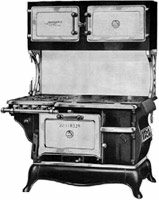 With such innovations as a thermometer mounted on the oven door and glass windows which allowed cooks to view the interior of the oven, the Kalamazoo Stove Company played an important role in the further development of the stove industry. At its zenith, the company maintained over 2,700 employees, two manufacturing plants in Kalamazoo, numerous warehouses in selected eastern cities, and hundreds of retail outlets in communities all over the country. 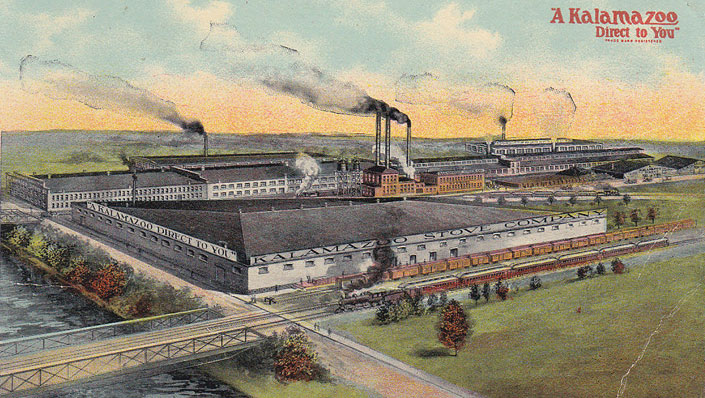 American involvement in World War II dramatically affected the Kalamazoo Stove and Furnace Company. To support the war effort, the company converted 97% of its production facilities to the manufacture of war material, such as aircraft landing gear mechanisms and tank armor plates. Reconversion after the war proved problematic. In an effort to remain competitive, the company modernized its factories and adopted more conventional sales methods. Yet because many of their stoves were powered by wood or coal, the company was slow to recognize the importance of gas and electric stoves and the new direction of the industry that they represented. Competition with such major appliance manufacturers as General Electric and Tappan Range Company ultimately forced the Kalamazoo Stove and Furnace Company to stop making stoves and furnaces in 1952, although it supplied parts for many years after that.

With an advertising slogan as rhythmic as the city’s name itself, the Kalamazoo Stove Company helped put this southwest Michigan city on the map. However, it had little chance of success against the new titans of the stove industry that rapidly embraced natural gas and electricity. Although the company was unable to survive the increasingly competitive postwar world, its high quality wood and coal burning stoves still warm many a rural home and backwoods cabin.

Kalamazoo, the Place Behind the Products

A History of the Kalamazoo Stove and Furnace Company

“When Michigan warmed the nations’ behinds”

Catalogs from 1904-1942 for the Kalamazoo Stove Company