Geek Fest
First Saturday at the Alma Powell Branch Library
Step Back in History: KPL at 150

How Kalamazoo Became ‘The Paper City’ 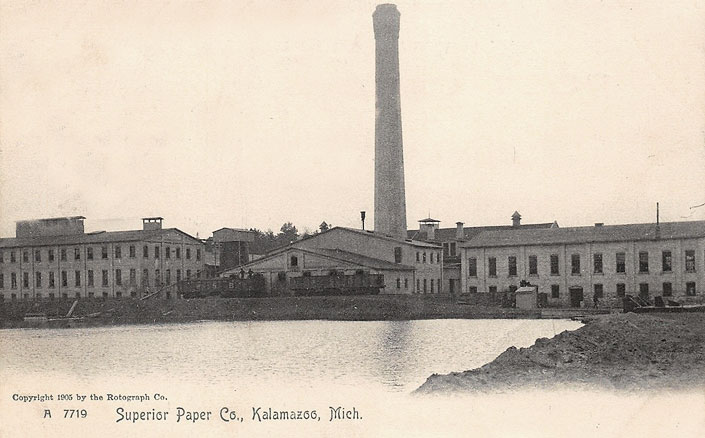 Kalamazoo has held many titles over the years including The Celery City, The Mall City, and The Bedding Plant Capitol of the World. It could be argued, however, that the most significant moniker in the history of Kalamazoo was ‘The Paper City.’ The paper industry in Kalamazoo began in 1867, and flourished throughout the first half of the twentieth century. It has been steadily declining ever since, but for more than one hundred years, paper was king in Kalamazoo.

The process of making paper is a complicated one requiring pulp from some sort of vegetable material, machinery, skill, knowledge, and lots and lots of water. The Kalamazoo River Valley was naturally endowed with plenty of water and timber, but the machinery and skill had to be imported. Fortunately for the future of papermaking in the area, men like B. F. Lyon, Noah Bryant, and Samuel Gibson, who came from various papermaking backgrounds, made turn-of- the-century Kalamazoo into a training ground for their craft. Old methods were refined and new procedures implemented in a progressive bid to make the Kalamazoo Valley a center of papermaking worldwide.

The first company to set up a mill along the Kalamazoo River was the aptly named Kalamazoo Paper Company in 1867. Their early successes prompted numerous other entrepreneurs to do likewise. Among many others, the Bryant Paper Company came to Kalamazoo in 1895 and the King Paper Company arrived in 1901. Outlying villages along the river were quick to adopt the successful business model of their urban counterparts, and by 1902 mills were operating in Plainwell, Otsego, Three Rivers, Watervliet, Vicksburg, and White Pigeon. There was even an entire town built around the paper industry. In 1909 Jacob Kindleberger established the Kalamazoo Vegetable Parchment Company just north of the city of Kalamazoo. The community that grew up around his mill was made up almost entirely of paper workers and their families, and in 1930 Parchment officially became a village.

These early mills were able to thrive because of a combination of factors. A constant stream of immigrants into the Kalamazoo area provided a labor pool that grew with the industry. The proximity and ease of access to nearby markets, particularly Chicago, provided by the railroads, gave Kalamazoo paper an outlet to the rest of the nation and the world. Finally, the importance of the Kalamazoo River cannot be understated. Its ability to provide water for the process of papermaking and to wash away the byproducts of the mills was of crucial importance to the budding industry.

The first half of the twentieth century was a period of growth for the paper industry. Mills were expanded, more workers were hired, wages steadily increased, and the quality and quantity of products continued to rise. A report by The W. E. Upjohn Institute entitled The Position of the Paper Industry in the Economy of Kalamazoo County Michigan in 1954 concluded “Yet so deeply is the paper industry embedded in the Kalamazoo area that in 1954 approximately 32 percent of the combined sales of all the manufacturing, distributive, and service industries and 24 percent of total personal incomes in Kalamazoo County came directly or indirectly through its activities. Through its effectiveness in the use of the natural and human resources of the area, together with its extensive use of national and world markets the paper industry touches the lives of almost all of us.” This report clearly demonstrated how Kalamazoo’s strong paper driven economy was able to support many associated industries. Companies such as playing card manufacturers, chemical coating plants, and shipping concerns that were only indirectly related to the paper industry were able to prosper. By this point Kalamazoo had truly become The Paper City.

It is difficult to pinpoint exactly when the paper industry around Kalamazoo began to falter. Perhaps, as mentioned in the report above, the area had put all its proverbial eggs in one papermaking basket and was unable to cope with the large implications of even small setbacks to that one industry. Another factor that certainly played a part in the paper industry’s decline was the growing environmental movement of the 1970’s. It has always been known that paper mills were great polluters, and many older citizens of Kalamazoo probably have vivid memories of the pungent smell given off by the river as it carried the waste products of various mills downstream. However, an increasing national consciousnesses about pollution finally led to legislation that could punish polluters, force industries to clean up their factories, and control how much waste they could release into the air and water. There is no doubt that this new mindset, as well as many new environmental laws, had an adverse effect on the paper industry’s bottom line.

In recent years almost all of the paper companies around Kalamazoo have closed. Local governments have spent millions of dollars demolishing old mills and attempting to find new uses for the land. Thousands of people who once worked in the industry have found themselves unemployed. The city directory for 2005 lists only 2 paper manufacturing businesses employing about 400 people. One remaining bright spot is Western Michigan University’s Department of Paper Engineering. Thanks to a donation of equipment from the former Fort James Corp., WMU is the only university in the world with the ability to turn pulp into finished printed paper. This high tech program continues to draw some of the best people in the paper industry to Kalamazoo. Once upon a time Kalamazoo proudly claimed the title of The Paper City, however, that name has passed from the headlines and is now truly a thing of the past.

Kalamazoo, the Place Behind the Products

Development of the Paper Industry in Michigan

“The Position of the Paper Industry in the Economy of Kalamazoo County, Michigan, in 1954”