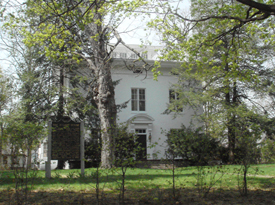 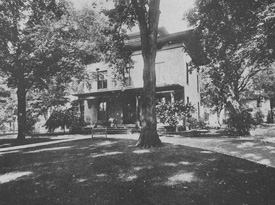 Already recorded by the State of Michigan as an historic site, this fine old mansion was once the family home of Senator Charles E. Stuart. Stuart, born in New York in 1810, came to Kalamazoo when he was 25 and formed a law firm with Governor Epaphroditus Ransom. In 1847, local voters sent him to the State Legislature, and in the winter of 1852-53, elected him to the U. S. Senate. During his term as Senator, he bought considerable acreage in the area around Mountain Home Cemetery. Then, in 1858, he built the fashionable Italian Villa on what later became Stuart Avenue. Shortly after he finished, he hosted the visit of Stephen A. Douglas to Kalamazoo, and later opened Douglas Avenue in his honor.

The Stuart home was one of a number of fine estates to the West and South of Kalamazoo at mid-century. Set in formal gardens, topped by an “observatory”, it contained six magnificent rooms on each floor. Stuart imported Italian marble for his fire-places, paneled walls in mahogany, supplied a library for himself and a ballroom on third floor for his social evenings. He even installed the village’s first indoor bathroom. When the Census-taker stopped by in 1860, he recorded an extended household including Stuart’s retired father, his wife’s father, two servants, a farmhand, and another couple. Stuart was then among the wealthy men of the village, listing assets of $45,000.

Stuart lived on in the house for a quarter of a century, practicing law and taking part in local political issues until he was incapacitated by rheumatism as the 1880 Census-taker noted. In 1883, the Stuarts moved to Cedar Street in the village. Samuel Browne, a local horseman, bought the Stuart home as a gentleman’s farm; In 1904, it passed to Charles Hayes, a local real estate speculator active in establishing the area around Henderson Park on West Main hill. Prominent attorney Harry C. Howard bought the house in 1924 and occupied it until his death in 1946.