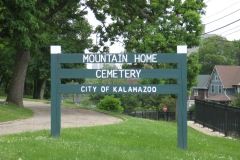 One of Kalamazoo’s oldest and most impressive cemeteries is Mountain Home Cemetery, located on the north side of West Main Street just west of Douglas Avenue. The trustees of Mountain Home Cemetery, including Isaac Moffat, Luther H. Trask, Nathaniel A. Balch, Epaphroditus Ransom, etc., were incorporated into an official entity in 1849. The grounds for the cemetery were purchased from Clark and Gilbert in 1850. The original parcel was 17 acres, roughly square, with two additions in subsequent years that  brought the property to 28 acres in size. A small Jewish cemetery adjoins Mountain Home’s southwest corner. The land was surveyed, and the purchasers chose lots for their personal use before putting the rest up for sale to the general public for the fee of twenty dollars.

Many of Kalamazoo’s most prominent citizens bought lots in the new cemetery. The list of lots sold by 1878 shows many familiar names, including U. S. Senator Charles Stuart, Paulus denBleyker, Ira & Charles Burdick, Stephen S. Cobb, Governor Epaphroditus Ransom, Henry and William Upjohn, and Frederick Bush. It is thought that the first person buried at Mountain Home was Mr. Nichols West, who died in 1849. Other well known Kalamazooans who are buried there include Charles B. Hays, Caroline Bartlett Crane, Edwin and Cynthia Van Deusen, John Fetzer, Albert M. Todd, James A. B. and Lucinda Hinsdale Stone, U.S. Senator Francis Stockbridge, and the Gilmore family.

In 1878 a handsome Gothic style receiving vault was constructed where the bodies of persons who owned a lot in the cemetery could be kept until their burial, which was sometimes delayed by weather. Another architecturally interesting building, the Romanesque-style sexton’s lodge, was built in 1892. During the first half of the twentieth century, the sextons of Mountain Home did double duty running a floral shop and several greenhouses in addition to the cemetery itself. The sexton’s house served as a florist’s shop into the 1950s. The last greenhouse was taken down in 1960 to make room for an expansion of the cemetery.

In addition to countless funerals, Mountain Home Cemetery has seen its share of other events, like the Memorial Day observance that was front-page news in the Gazette in 1891. It has also survived the 1980 tornado that tore through Kalamazoo, causing significant damage to trees and headstones in the cemetery. However, a stroll through Mountain Home is usually a quiet and peaceful affair that showcases the final resting places of many of Kalamazoo’s most well-known and influential citizens.

Walking Through Time: A Pictorial Guide to Historic Kalamazoo

“Tributes to the dead: the heroes of the war honored by the populace”

“West Main loses landmark:greenhouse on the hill bows to expansion”

For a full list of articles, consult our Local Information Index.

More than 7000 records, some with photos and additional information