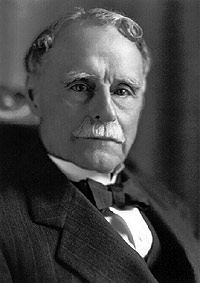 One of Kalamazoo County’s most widely known citizens was Albert M. Todd, who in 1869 began the thriving mint industry that continues to flourish in Kalamazoo nearly three quarters of a century after the death of the “Peppermint King.”

Albert Todd was the tenth and last child of Alfred and Mary Ann Hovey Todd, of old New England stock. In common with many early Michigan settlers, his parents had migrated to Michigan from upstate New York. They settled in St. Joseph County, where Albert was born in 1850. The wide cultivation of mint in that area influenced young Todd and one of his brothers to experiment with growing and distilling it.

He studied chemistry at Northwestern University, then traveled to Europe and studied mint production there, bringing back different varieties from European gardens. Returning to this country, he established the A. M. Todd Company, which continues to produce mint and other flavoring oils more than a century later. In 1891, he moved his thriving company to Kalamazoo, where he built a handsome building for it on Rose Street. He also bought a fashionable South Street home for his family.

Albert Todd’s legacy goes beyond the minty flavor that lingers so sweetly on the tongue. His early visit to Europe was also the beginning of a lifelong interest in the collection of rare books, and artwork. By the time of his death, Todd owned over 11,000 volumes, some dating back to the twenty-third century B.C. These were in the form of tablets of clay, upon which the writing was inscribed and baked. His art collection included 228 paintings, sculptures, pottery, and porcelain works from all over the world.

Todd donated many of his paintings and rare porcelains to help establish the Kalamazoo Public Museum in 1927. He also established the A. M. Todd Rare Book Room at Kalamazoo College. Other artwork and manuscripts were placed in collections at Western Michigan University and the University of Michigan.

Politics and government were also among Todd’s interests. On his European travels, he studied governmental institutions, paying particular attention to the public ownership and operation of public utilities. He wrote several essays on the subject and made considerable effort to stimulate interest in public ownership of utilities in the United States.

In 1894, he ran unsuccessfully for governor of Michigan on the Prohibition ticket. Two years later he switched to the Democratic Party, and won a seat in Congress from a predominately Republican district. He established a family tradition. Two of his sons served as mayors and city commissioners of Kalamazoo, and his grandson Paul Todd Jr. later filled his seat in congress.

Albert Todd died at his home on October 6, 1931, leaving his wife, Augusta Allman Todd, and five children. His descendants continued to run the business that he established until 2011, when its assets were purchased by WILD Flabors GmbH of Switzerland.