Step Back in History: KPL at 150
Bedtime Stories
A Very Big Fall with Emmy Kastner 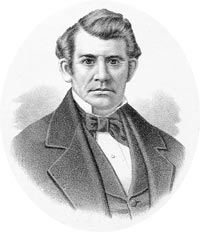 He was one of those men whose lives are constantly in the spotlight. Whether for good or ill, the fortunes of Epaphroditus Ransom were well known to characters of all sorts, for he mingled freely with old stock New Englanders and pioneer Michiganders, with local farmers, national politicians, and common criminals. Local accounts relate how, when the last Potawatomi Indians were forced to leave Michigan for reservations in the west, they marched past his house in a line, each removing their headgear and raising their right hand as a sign of respect. “Governor Ransom was a man of commanding presence; in height, over six feet; in weight, exceeding two hundred pounds; massive head, with a voice of power.” He was a man people remembered.

Epaphroditus Ransom was born in Massachusetts in 1796. When he was still young, his well-to-do family moved to Vermont where he attended the prominent Chester Academy for four years. In 1823 he received his law degree from the Law School at Northampton, Massachusetts. Soon afterwards he returned to Vermont to start his law practice, but instead began both his family life and his political career. Epaphroditus Ransom married Almira Cadwell in 1827. They would eventually have four children (two of whom died in infancy) and would spend the next 32 years together. During this second stint in Vermont, Ransom was elected Justice of the Peace and served in that capacity for five years.

All was well with the Ransoms and their growing family in Vermont, but several of Epaphroditus’ siblings had earlier emigrated to Michigan Territory. Their letters back to their big brother about the beauty and opportunity of that place were very persuasive. Another famous Vermonter turned Michigander, Lucius Lyon, also wrote to his friend attempting to convince him to make the move. In the autumn of 1834, Epaphroditus decided to move his family to the tiny village of Bronson in southwestern Michigan. The journey took over a month by wagon and steamboat, but on 14 November 1834 the Ransoms arrived at Bronson. Stories about the first residence of the Ransom’s vary, but one account relates that the family spent that first winter in Michigan in the recently vacated log cabin of the town’s founder, Titus Bronson.

Besides securing a dwelling, one of Epaphroditus’ first actions upon his arrival in Bronson was to gain admittance to the bar and to begin practicing law. This he did a mere five days after settling in his new hometown. Over the course of the next year, Ransom built a new home for his family and a new office for his practice on the northeast corner of Main and Burdick Streets. He also formed a fortuitous partnership with another young democratic lawyer named Charles E. Stuart. Both men would go on to receive high acclaim in Michigan politics.

Epaphroditus Ransom’s political accomplishments were too numerous and varied to describe in any great detail here. A brief overview will have to suffice. His first appointments came in 1836 when he was made a circuit court judge and associate justice of the state supreme court. As a judge on the 2nd circuit, which at that time included the entire western half of the lower peninsula, Ransom must have cut a dashing figure, riding around in the virtually untamed wilderness meting out justice to criminals and befriending the common people of western Michigan. In 1843 Ransom was rewarded for his work on the circuit with an appointment as Chief Justice of the Michigan Supreme Court, which he held until 1847. That was the year that all those farmers that he had befriended, along with a majority of citizens in every county, elected him as the 7th governor of the state of Michigan. Later in his life he served as a member of the Michigan House of Representatives, the president of the Michigan Agricultural Society (eventually to become Michigan State University), a regent of the University of Michigan, and finally as a receiver at a land office in Fort Scott, Kansas.

Ransom was the first Governor inaugurated in Lansing, the new capital of Michigan. His tenure was characterized by three main themes. First, Ransom concentrated much of the focus of his governorship on passing laws relating to the newly discovered mineral wealth of the Upper Peninsula. He also concentrated heavily on internal improvements to his state. Lastly, he developed an interest in plank roads, and a large number of plank road companies were incorporated during his term. Ransom also strongly supported the establishment of asylums for the insane and the deaf. His support on this issue would eventually lead to the building of the Michigan Asylum for the Insane in Kalamazoo. However, his faith in the future of plank roads was destined to cost Ransom a lot of money later in his life.

Epaphroditus Ransom served one two-year term as the governor of Michigan. He did not run for re-election, partially because of his views on the controversial Wilmot Proviso (which would have prohibited the spread of slavery to new territories acquired by the United States from Mexico) that went against the mostly conservative Democratic party line. After his term ended, Ransom returned to his farm in Kalamazoo. In 1851 he sold the farm to Paulus denBleyker for a large amount of cash and went into business with his son. They invested heavily in plank road companies and lost everything in the Panic of 1855, and as plank roads succumbed to the ever-expanding railroads.

The final chapter in the life of Epaphroditus Ransom involved one final westward migration. In 1857 president James Buchanan appointed him receiver of a land office in the Kansas Territory. He worked there for two years until his death on 9 November 1859. About a year later his remains were returned to Kalamazoo, where he was given a large funeral at St. Luke’s Episcopal Church and was buried in Mountain Home Cemetery. In 1987 a historical marker was erected at the corner of South Burdick and Cedar Streets, near the location of the former Ransom farm. It has been said, “No man ever held a stronger hold on the affections of the people in western Michigan than Epaphroditus Ransom.”

The Public Life of Epaphroditus Ransom

Messages of the Governors of Michigan