One of the most interesting and productive careers ever to unfold in Kalamazoo began with an unusual childhood. Caroline Bartlett was born in Hudson, Wisconsin, in 1858 to Lorenzo and Julia Bartlett. Her father was owner and captain of a small steamboat, and he taught Caroline how to navigate the Mississippi River at an early age. In her teens she heard a stirring sermon by a Unitarian minister which inspired her to set her sights on becoming a minister. This calling was to stay in her heart as she pursued her college degree, graduating as valedictorian from Carthage College in Carthage, Illinois, in 1879.

After graduation she held a variety of jobs including teacher, principal, and newspaper reporter. One of the highlights of her newspaper career was an interview with Mark Twain in 1885. Intrigued on hearing that she claimed to have experience as a Mississippi River pilot, Twain attempted to prove that she was a charlatan. But after Caroline correctly answered a number of his questions, he laughed and said “I give up!” and gave her an interview that even seasoned journalists had failed to get.

Dream of the Ministry

Caroline’s desire to become a minister was never far from her thoughts. After spending eight months in solitude meditating and exploring her personal theological questions, she wrote her father requesting his blessing to become a liberal minister. “Liberalism” denoted an openness to “divergent opinions and intellectual liberty.” Shortly thereafter she was accepted as a candidate for the ministry at the Iowa State Unitarian Conference. Her first church was the All Soul’s Unitarian Church in Sioux Falls, Dakota Territory, where she remained for three years.

In 1889 Bartlett became pastor of the First Unitarian Church of Kalamazoo. Within a short time she led the church to begin the first free public kindergarten, a school of manual training and domestic science, a gymnasium for women, a day nursery, a cafeteria and the Frederick Douglass Club for the “young colored people of the city.” The church continued to expand until it outgrew its building. In 1894 a new one was built and renamed “People’s Church.”

In 1896 Caroline Bartlett married Dr. Augustus Warren Crane in a surprise ceremony at a New Year’s Eve service at People’s Church. She continued on as pastor before “retiring” two years later. For Caroline Bartlett Crane, however, ending her career as a minister meant beginning a new career as a civic reformer. Among her many concerns was the unsanitary conditions of slaughterhouses in the Kalamazoo area. Under her leadership, laws were changed, and Michigan municipalities were given the power to regulate meat packing. She went on to organize the Kalamazoo Women’s Civic Improvement League to promote public health projects. She served as a consultant in similar matters to more than sixty cities nationwide and ranked among the most significant of the Progressive Era’s “municipal Housekeepers.”

A lasting tribute to Caroline Bartlett Crane is an unpretentious colonial-style house, still located on South Westnedge Avenue, which won first place in the Better Homes in America contest in 1925. Crane headed a local committee that designed the house to be functional and affordable for a family of moderate income. Called “Everyman’s House,” it was built by volunteers and received much national attention. There are additional images and documents relating to Everyman’s House on the Making of Modern Michigan website. 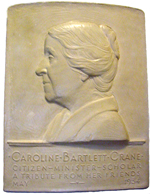 Caroline Bartlett Crane died at her home on Hillcrest Avenue in 1935 at the age of seventy-six, leaving her husband and two adopted children, Bartlett and Juliana. She is buried in Mountain Home Cemetery. In 1985 her achievements were recognized by her induction into the Michigan Women’s Hall of Fame. She is also remembered with a bas-relief from her friends, inscribed: Caroline Bartlett Crane “Citizen — Minister — Scholar”, which hangs in the Local History Room of the Kalamazoo Public Library.

A Just Verdict: the Life of Caroline Bartlett Crane