Step Back in History: KPL at 150
A Very Big Fall with Emmy Kastner
Bedtime Stories

Unless the thousands of patrons that stream through the doors of the Central Library in downtown Kalamazoo make their way to the third floor, they are unlikely to know of Dr. Edwin H. and Mrs. Cynthia Wendover Van Deusen. Even if they use the auditorium named in honor of the couple, they might easily pass by the oil portraits of the elegant pair that hang on the wall just outside without reading the accompanying plaque and might never realize that the two were responsible for the public library building being on this site since 1893. And that’s just how Dr. and Mrs. Van Deusen would have liked it. Their philanthropic contributions to Kalamazoo were always made with an eye to avoiding the limelight and quietly improving the quality of the community in which they lived.

Dr. Van Deusen was born in Livingston, New York in 1828. At the age of 20, he enrolled in the College of Physicians and Surgeons at New York and graduated two years later. His medical specialty turned to the diagnosis and treatment of the mentally ill when he was appointed as the first assistant physician at the New York State Lunatic Asylum in Utica in 1855. He held this position for three years.

In July of 1858, he married Cynthia A. Wendover, a marriage that formed a partnership that would last for fifty years.

A Career in Mental Health

After the State of Michigan had enacted legislation to establish the Michigan Asylum for the Insane in Kalamazoo, Dr. Van Deusen made several trips to the city to superintend the erection of the Kalamazoo Asylum and to form public opinion favorable to the institution. He was appointed superintendent of the asylum and moved here with his wife in the fall of 1858. Even though legislation had been passed to establish the facility, financial appropriation in sufficient amount to run the institution had not followed. Dr. Van Deusen helped secure $100,000 to do so. Building expansion quickly followed, as well as new techniques for the treatment of its patients. As was later said of his tenure, Dr. Van Deusen’s studies in neurasthenia paved the way for the establishment of preventive medicine that would leave practitioners of diagnosis and treatment of the insane forever in his debt.

After 20 years in his post of superintendent, Dr. Van Deusen retired in 1878 because of ill health. His retirement, however, proved an impetus for continued philanthropic contributions to the city by him and his wife until their deaths, his in 1909 and his wife’s in 1914. For 36 years the Van Deusens shared their substantial means in quiet acts of community improvement.

Probably their biggest gift to the community was the public library building erected in 1893 on the southeast corner of Rose and South Streets. For years the library, under the governance of the public school board, had problems finding a permanent home. For a time, it was located in the old Corporation Hall on South Burdick Street, and that was the breaking point for Dr. and Mrs. Van Deusen. The thought of school children and library patrons using the same stairway as criminals led them to make an offer of $50,000 for a new library building if the board would furnish the land. The money was for construction, and only two stipulations accompanied the offer.

One was that a suitable room be arranged for the Academy of Medicine. Dr. Van Deusen felt the library could better afford to buy medical books than many doctors could for their own medical libraries.

The second stipulation was that reading rooms be open to the public on Sunday in order that workers who toiled throughout the week could have a day to enjoy the library. 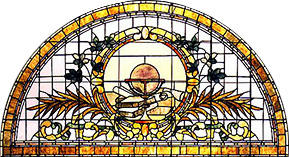 The initial donation for the library grew to something nearer $75,000, primarily because the Van Deusens chose expensive interior decorations. Their taste helped make the library a place that is still fondly remembered by its patrons, more than forty years after it was finally demolished. Three of the beautiful stained glass windows from the original library were reinstalled in the present building.

At the same time the library was being constructed, a movement was taking place on the East Coast to establish separate, special reading rooms for children. This idea was taken up in Kalamazoo, so a pleasant and well lighted room in the basement of the new building became one of the first children’s rooms in Michigan. The Van Deusens had declined to have the whole library named for them; instead, the new children’s room was named in their honor. They were pleased and often visited the room to see the children.

In addition to the library, the Van Deusens helped raise money for the erection of St. Luke’s Episcopal Church and donated funds for the building of the church rectory.

They also contributed heavily to the building fund for Bronson Methodist Hospital. This particular gift lives on, not only in the hospital itself, but fittingly enough, in the Hospital Hospitality House of Southwest Michigan. It was established in 1985 as a vision of the Junior League of Kalamazoo, in collaboration with Borgess Medical Center and Bronson Methodist Hospital, in response to a need for a place to stay for pre/post admission patients and their families. This refuge is located in the Van Deusen’s beautiful former home on South Street.

After Dr. Van Deusen’s death, Mrs. Van Deusen continued her practice of helping the poor and downtrodden in Kalamazoo until her own death. She did so personally, without relying on a foundation to perform the work for her.
Though both of them died at the same medical institution in New York, the Van Deusens are buried in Mountain Home Cemetery in Kalamazoo, the city they loved and so quietly changed forever.

Written by Fred Peppel, former Kalamazoo Public Library staff member, in January 2005, with thanks to Martha Lohrstorfer for research that she contributed to this sketch. Last updated June 3, 2010.

Compendium of History and Biography of Kalamazoo County, Mich