Read Along!
So You Want to Publish
2022 Summer Reading Challenge

The municipal-run Red Arrow Golf Course (1041 King Highway) was built along the Kalamazoo River in 1937. Its construction represents one of several notable Works Progress Administration-funded projects developed with the goal to both enhance the community’s infrastructure, and to counter Depression-era unemployment. Situated just five minutes from downtown Kalamazoo, the public course is nestled between King Highway and Mills Street. The diminutive course has long been popular with novices and seniors who appreciate the affordable prices and modest length of holes. 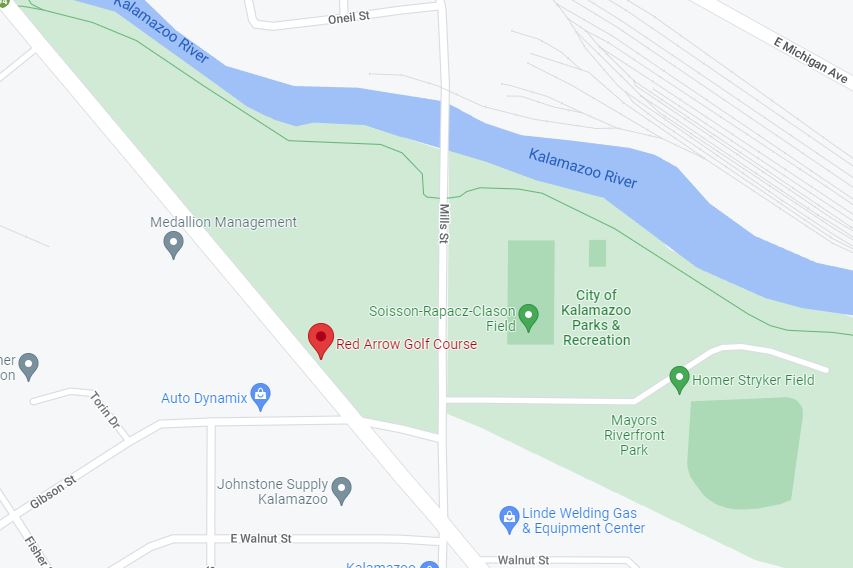 In 1924 the City of Kalamazoo purchased the land that currently makes up Mayor’s Riverfront Park and Red Arrow Golf Course from M.H. Lane and F.B. Lay, owners of the Michigan Buggy Company. The purchase price for the 100 acre land was $50,000. Prior to the purchase of the riverfront land, the area was characterized as “a dump, a housing development and a hangout for tramps and hoboes nicknamed “the jungle” (City of Kalamazoo Parks, p. 34). The city was determined to convert the eyesore at the oxbow into a jewel, or as Charles Farrell, chairman of the Chamber of Commerce river front improvement committee put it, a “Belle Isle”.

When the Great Depression hit in the early 1930’s, many public works projects languished from a lack of funds. But with the infusion of Federal money through the WPA, the city was able to add “nine tennis courts, fourteen softball diamonds and six baseball fields” (City of Kalamazoo Parks, p.10). When the park officially opened in 1930, the park was dedicated as the Red Arrow Post Athletic Field. In addition to building the golf course, the WPA also funded the construction of a nearby football field adorned with bleacher seating.

“After the Civilian Works Program paid 1000 Kalamazoo men $15/week to improve and finish Milham Park in 1935, the Works Progress Administration spent $55,000 the following year on Red Arrow Park that was named for Col. Joseph B. Westnedge’s WWI brigade. That effort involved straightening the Kalamazoo River by dredging the river bottom to fill the oxbow. Adding more fill for the remaining oxbow happened because the city commission required the Kalamazoo Garbage Company to dump its collections there in 1937, the year recognized as the beginning of Red Arrow Golf.”–SW Spark, April 2013, p. 21

In 1984, the Kalamazoo Municipal Golf Association took over the operation of the one mile, 9-hole course, sometimes referred to as a “pitch-and-putt course”. Since 2012, the course staff has been made up of volunteers, with admission fees and concession sales collected toward the maintenance of the course.

“Riverfront in Few Years to Be “Belle Isle” of Kalamazoo”