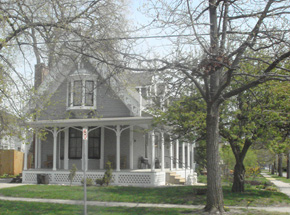 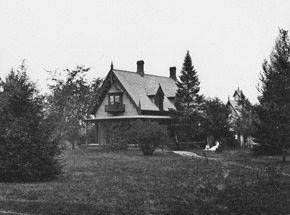 Kalamazoo was doing the nation’s greatest “land-office business” in 1835. The rush to settle the village and the several prairies around it was on in earnest one day in June when a wagonload of immigrants from Vermont stalled in the middle of the Kalamazoo River near what is now Riverside Cemetery. Out into the stream splashed Amariah Prouty and his brother-in-law, Dr. Fletcher Ransom ” to lead the team across, leaving wives and children to watch.” Once fairly into the village, they pulled up at the home of Epaphroditus Ransom. From this base, Prouty surveyed the opportunities in the community. He soon established himself on what is now West Michigan as the town’s first cabinet-maker.

Active in Whig politics and community affairs, Prouty lived on the corner of South and Park Street for many years. Then in 1847, he platted land on the west edge of the village (east of Elm and north from Main to Willard.) A few years later, he moved onto the triangular plot bounded by Kalamazoo Avenue, Elm Street and the railroad tracks. There in 1852, he built this splendid little gothic cottage.

With its steep roof pitch, the elaborate “tracery” ornamentation at the gable end and at the dormer windows, and with the gothic pillars supporting the veranda, this cottage reflects the Romantic nature-oriented sentiments affecting a number of Americans in the 1840’s and 1850’s. It might have come from any one of several popular builder’s manuals of the period. Architects like Andrew Jackson Downing frequently described this style as most appropriate to the American people, but it never established itself against the dominant “Greek Revival” temples. Instead, it appealed to men who thought of themselves as a bit set apart from others–as an architecture for country gentlemen “of taste and refinement”. Downing wrote an elaborate treatise on landscape design in the 1850’s. In it he advocated that cottages such as Prouty’s be set in naturally wild and informal surroundings, since they reflected the same Romantic love of “Nature” found in William Cullen Bryant’s poetry or in Emerson’s Essays.

Prouty provided just the right natural setting for the cottage (which he called “Arcadia”) and soon added the first nursery in the village. There he specialized, the Gazette noted in 1854, in “evergreens, fruit, ornamentals, roses, peonies, etc.” Six years later, the Census-taker found him a moderately successful “horticulturist” ($20,000 estate) with six children still living at home. The next decade saw several changes. Prouty’s son George, barely old enough to enlist, died in the Civil War. A lengthy court case ended in Prouty’s favor. He sold his home on Elm and moved to a fine location on the west side of Bronson Park. The Census-taker in 1870 described him as a “retired farmer” living with his wife and youngest son, and holding an estate of $52,000. In 1888, after a residence in Kalamazoo of more than half-a-century, he died from injuries suffered when he fell while working on his home. He left behind Sophia, his wife, 82, and five of his thirteen children.

The house on Elm Street meanwhile passed through many hands. At one point (in the 1880’s perhaps) it was moved from its central location to a single lot on the corner of Elm and Eleanor, and the elaborate grounds were divided into smaller lots.