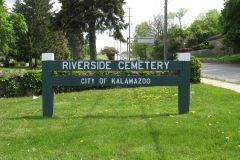 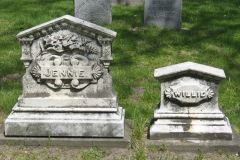 If Mountain Home is the cemetery for Kalamazoo’s rich and famous, then Riverside is the cemetery for the common man. As such, it features more of a humble, welcoming atmosphere than its grander privately owned counterpart across town. Winding paths and shady trees grace a relatively flat landscape that has steadily grown along with the city whose men, women, and children rest within its bounds.

In 1861 the Kalamazoo Township Board of Health appointed a committee with the task of purchasing land for a new public cemetery. They had determined that the old South West Street Cemetery was no longer sufficient for the needs of the growing community and that a new, larger site was needed. Twenty-six acres were purchased from Jeremiah P. Woodbury and were surveyed and laid out for use by 1862. The new cemetery was named Riverside and is located on what is now the corner of Gull Road and Riverview Drive on Kalamazoo’s east side. This area was particularly important to the history of Kalamazoo. It is the location of a good ford in the Kalamazoo River, where several Indian trails converged, and was the primary reason why the village was established here instead of some other location.
Riverside has always been a public cemetery, so it has always been accessible for the average Kalamazooan. The original 250 lots sold for as little as three dollars. Some of the oldest graves in Riverside are people who were originally buried in the old South West Street Cemetery and then were moved to Riverside after the old cemetery closed. Well-known names like pioneer missionary Leonard Slater, war hero Joseph B. Westnedge and his brother Richard do grace the stones in the cemetery by the river, but for the most part, Riverside is the burial place for Kalamazoo’s farmers, merchants, and factory workers.

An interesting feature of Riverside Cemetery is its Civil War Memorial. The Kalamazoo Chapter of the GAR dedicated the memorial in 1901. It stands 25 feet tall and is topped with a granite sculpture of a Civil War soldier. A section containing the graves of Civil War veterans is located nearby. In 1962 the Civil War Centennial Commission obtained markers for 88 unmarked graves in this area. Others were still unmarked as late as 1997 when the Sons of Union Veterans of the Civil War, identified about 50 graves and began procuring headstones for them.

Unlike Mountain Home, whose boundaries were limited by neighborhoods on all sides, Riverside was able to expand as the city’s needs dictated. A Catholic Cemetery was added to the original parcel in 1862, and a small Jewish cemetery also adjoins the northwest corner of the property. Additional expansions to the main body of the cemetery took place in 1882, 1934, 1939, 1950, 1953, 1960, 1962, and 1984. Each section of the cemetery has different regulations governing what types of markers and decorations are allowed, based on the needs of the community at the time that section was opened. Riverside currently covers approximately 90 acres and contains the graves of more than 84,000 Kalamazoo citizens.

For a full list of articles, consult our Local Information Index.