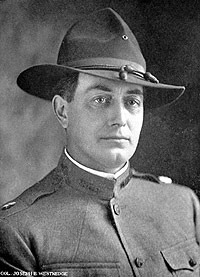 Barbed wire. Mustard gas. Machine-gun fire. No man’s land. Colonel Joseph Burchnall Westnedge faced these deadly challenges daily as he defended our country in the first World War. Born on 16 August 1872 of an old Kalamazoo family, Westnedge first entered military life when he joined the Michigan National Guard in 1894. He later attended Kalamazoo College where, as the star halfback, he led the football team to an undefeated season in 1895.

During his subsequent military career, Westnedge steadily climbed the military hierarchy: first as a captain during the Spanish-American War in 1898, then as a lieutenant-colonel during the Jackson prison riot of 1911, and finally as a colonel after his service on the Mexican border in 1916.

When the United States declared war on Germany on 6 April 1917, “Colonel Joe” was a manager at a Kalamazoo paper company. Answering the nation’s call to arms, Westnedge remarked: “We are going, perhaps never to return, and the parting is hard, but a call greater than any other summons us away.” Westnedge was one of the few National Guard officers to retain his command in the National Army, a tribute to his competence as a commander.

Enormously popular with his troops, Westnedge was always concerned with their well-being. He commanded the 126th Infantry, an integral part of the famous 32nd “Red Arrow Division“. One of the earliest American units to be sent overseas, the 126th spent the end of 1917 training in Waco, Texas, and arrived in France in March 1918. The 126th then participated in a number of key offensives in the summer and fall of that year. A few days before the armistice was signed, Colonel Westnedge had been sent to an army hospital in Nantes, France. He died there of complications of tonsillitis on 29 November 1918, only eighteen days after the war had ended.

Two years later his body was finally brought home and reburied at Riverside Cemetery. Local mourning for “Colonel Joe” was widespread; thousands of people lined the streets for his funeral procession. West Street was renamed Westnedge Avenue as a tribute to the city’s fallen hero. Cited for the Distinguished Service Cross and awarded the French Croix-de-Guerre, Joseph B. Westnedge had honorably served his country and his community.

Kalamazoo in WWI: the story of Colonel Westnedge and the 126 infantry

“By George, the Saga of Kalamazoo’s Doughboys”