Mobile Library — Root Beer Stand Milwood
Read Along!
So You Want to Publish

Publisher of The Kalamazoo Gazette

Like many Kalamazoo pioneers who settled in the Village of Bronson (later changed to Kalamazoo) during its earliest years, Volney Hascall hailed from the state of New York (Leroy, Genesee County). Hascall, owner and publisher of The Kalamazoo Gazette from 1846 until 1862, arrived in 1830 at the age of ten with his father’s family. As was the case with other early pioneers, the family settled several miles southwest of the Village of Bronson. Hascall described these early years, in what is now Prairie Ronde Township, prior to running the paper.

“It was on June 22, 1831, that our family fires saw the spot marked out for its future home in the wilds of Michigan. This was on Genesee Prairie, four miles southwest of Kalamazoo village, where my father in company with Anthony Cooley and Erastus Smith had immigrated and located their claims in October, 1830. They gave the prairie its name in honor of Genesee county, New York, from whence they came.

On our arrival in June we found three or four families who had preceded us and pitched their squatter tents on various parts of the prairie. These were Enoch Harris, a colored man, and his wife; a Mr. Wild and family; a Mr. Hunt and family; a Mr. Stillwell and family. The surrounding country was wild and undisturbed as it had been for centuries.” (KG, 10-18-25)

Classically educated at the Kalamazoo branch of the University of Michigan and the Literary Institute (an early version of Kalamazoo College) in the subjects of Latin, English Literature and mathematics, the erudite Hascall gravitated toward a practice of law before shifting to journalism, when an opportunity to apprentice under Henry Gilbert in 1835 arose. At 23, he was admitted to practice law in 1843, but chose instead to make his mark on Kalamazoo history by purchasing the Gazette. 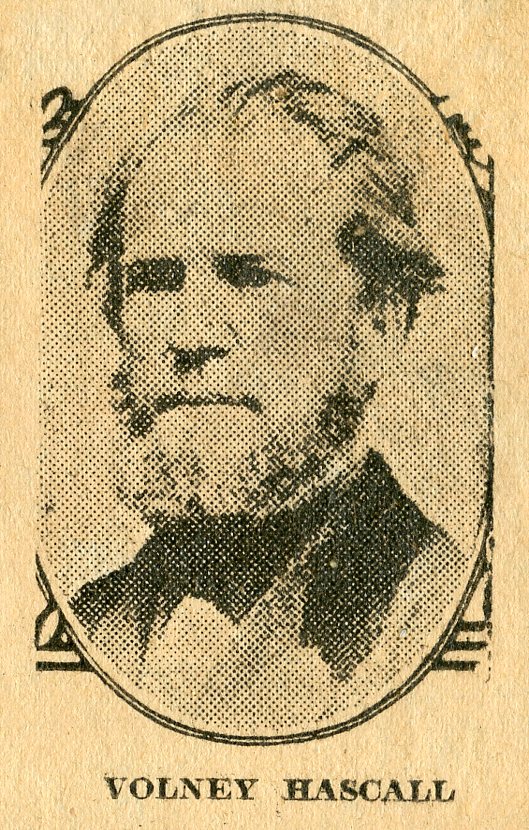 In 1835, the year Hascall began his training under the tutelage of Henry Gilbert, the first issue of the newspaper was published in Kalamazoo (previously, the paper had been published in White Pigeon). The name of the paper at this time was The Michigan Statesman and St. Joseph Chronicle. It wasn’t long before the apprentice was to become the newspaper’s driving force during the antebellum years. In a few short years, the Statesman was renamed (1837), and its ownership transferred from Gilbert to E.D. Burr in 1840, then to J. Whitley Breese, and then finally to Hascall in 1846.

“After assuming ownership of The Gazette in 1846, Mr. Hascall wrote with a vigorous aggressive style, and like his old employer Henry Gilbert, under whom he had served as an apprentice, he never failed to strike stinging blows in the interests of Democracy.”

The Gazette with Hascall at the wheel reported on stories of the day, both the remarkable and the humdrum, the local and the national. In 1849, the paper chronicled the California Goldrush craze, and the local men (dubbed the “Kalamazoo Boys”) who trekked westward in hopes of finding their fortune along mountain streams. Hascall and his staff also expressed support for the Texan people involved with the dispute over annexed land during the Mexican-American War (1846-48). During these years prior to the outbreak of the Civil War, the topic of slavery, and the increasingly fraught political relationship between northern and southern states were often discussed within the pages of the Gazette. Despite his opposition to the war and its impact on the nation, Hascall’s icy dismissal of the efforts of anti-slavery activists as nothing more than a political stunt, and his support for the presidential candidacy of Stephen A. Douglas in 1860 suggests a willful blindness to the horror of slavery, and a morally indefensible embrace of Douglas’ theory of popular sovereignty.

The intense rivalry between the Gazette and The Kalamazoo Telegraph was hardly a secret, with the Telegraph echoing political support for the Whig Party, and the Gazette aligning itself with the Democratic Party. Hascall was not an editorialist whose writing could be characterized as charitable or unbiased. Venomous broadsides were more to his liking. For example, in 1854 his contempt for the Telegraph unfolds with little doubt as to his feelings.

“The Telegraph parasite, unwilling to work and prosper, employing what little activity his torpid corpocity will permit, is venting his spleen upon us because we are prospering under the influence of unceasing effort, and an honest fulfillment of our obligations. With what contemptibly mean spirit characteristic of the class to which he belongs, he is filled with envy only really active elements of his nature, and through the agency of these, he is enabled to pour through his columns, from week to week, the ebullitions of his envy and hatred. These displays have formed the staples of his editorial columns ever since he discovered that laziness and non-performances of pecuniary obligations were not so well calculated to win success and confidence as punctual dealings and steady industry. His effort is not like a man of honor and stamina, to build himself up, but it is that groveling one which delights in pulling others down. Subsisting by the fostered care of influential relatives he neither understands nor appreciates the position of a self-relying independent person.”

One of the few local stories that both papers could agree upon was the arrival of railroad service to Kalamazoo. Both paper’s editors celebrated the arrival of the Michigan Central in 1846. Hascall and his Telegraph counterpart, George Torrey, claimed that Kalamazoo’s growth and prosperity would be connected to the railroad.

“As an editorial writer he was terse, clear, logical, forcible, and convincing, and for many years he and his journal were a political power. In this field he attained distinction, many of his editorial contributions to the “high debate” of great constitutional and political questions attracting attention in all parts of the Union.”–from History of Kalamazoo County, Michigan, p. 283

After returning from a trip to Europe in 1861 (Hascall traveled to Europe often for rest and intellectual stimulation), and suffering from poor health that impacted his capacity to effectively run the newspaper, Hascall reluctantly sold the newspaper in 1862 to J.W. Mansur. During his reign as owner and publisher, the newspaper was relatively stable, prosperous and popular, but after selling to Mansur, the Gazette suffered from multiple owners throughout the next decade.

Hascall married twice, first to Louisa A. Sweetland in 1844, and then to Sophie Beerstrecher in 1864. Hascall died February 21, 1879, and is buried in Mountain Home Cemetery.

“Former Editor Has Own Story of Early Days”