As noted in an earlier article about the influence and entrepreneurial acumen of German immigrants to Kalamazoo from 1870-1914, many Main Street buildings were home to some of Kalamazoo’s most successful enterprises. One of those, connected to the cultural and artistic life of the growing city, was the Musical Institute of Anna Jannasch-Shortt, a narrow, red brick building located at 228 E. Main Street. Today the building resides at 254 E. Michigan Avenue.

Before she was known as ‘Madam’, Anna Josephine Jannasch was a young girl who immigrated to Kalamazoo with her family from Saxony, Germany. Her father Charles F. Jannasch (1819-1897) brought the family to Kalamazoo around 1850, a year after Anna was born. He became a notable businessman who helped to organize the German fire company Germania No. 3. He was also a successful gunmaker, a notary, an agent of steamship companies, and a  justice of the peace while in Kalamazoo.

As a precocious child, Anna studied music under several renown teachers. It appears that she possessed prodigal talent from an early age.

“Without a doubt there is no one in the state so thoroughly and conscientons [sic] as this ambitious and happily gifted woman. Studying ardently from childhood up till today the press and public have both unanimously acknowledged her as one of the leading musicians of Michigan. Assisted by her pupils she has given numerous concerts in this as well as in other cities, meeting with approval from all.”

In a 1867 city directory, Anna’s occupation is listed as “musical teacher.” At only 18, having just graduated from high school she was already on her way to cementing her name as one of the city’s most prominent instructors. In 1868, an article in the Kalamazoo Telegraph listing teachers and where they were stationed, cites Jannasch as the only instructor at the “Colored School.” 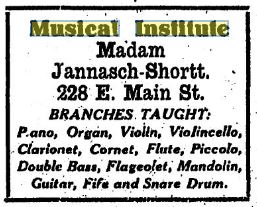 Before she went into business for herself, she spent a decade in the schools, tutoring students on the finer points of both musical technique and appreciation. In addition to her teaching duties, Anna played organ in the German Presbyterian Church and the German Lutheran Church. In 1878, she married Frederick Shortt, a printer who died in 1903. The same year as her marriage to Frederick, Anna established her conservatory. Her rigorous course produced many accomplished musicians who after graduating went on to work as “teachers, concert players, band masters, orchestra leaders and orchestra players.” On March 14, 1902, the school and music hall situated on the second floor of the slim building along E. Main Street was dedicated. The building’s unique roof details includes a pediment with a lyre logo that remains today.

After years of teaching and putting on student recitals, in 1909 she married Dr. Andrew Dienst of Topeka, Kansas. According to the Kalamazoo Gazette, her marriage to Dienst came as a “surprise” to friends and the general public. In their reporting of the event, the Gazette described Jannasch-Shortt’s accomplishments:

“Forty-one years has the bride given to this work which she loves and for which she is so peculiarly fitted and previous to that time she spent ten years as instructor in the public schools of Kalamazoo. She has been much admired by her pupils whose deep affection she has won by her untiring interest in their musical welfare. She is very gifted as she can play almost any musical instrument made and can teach as well. In her studio are grand and upright pianos, cabinet organs, violins, mandolins, guitar, snare drum, flute and many other instruments, all of which she has mastered. For the past five years she has been alone with all the responsibility of this work and she feels that a companion is what she needs and that in Dr. Dienst she will find that feeling of fellowship that she so much needs.”

Anna considered her late in life union to be “romantic,” adding, “there are many that I might have had but I just could not trust them like I can the doctor. He is a fine man, is wealthy and has two beautiful daughters of whom he is very proud.” Unfortunately the bliss Anna felt on her wedding day could not be sustained, and the couple divorced in 1913.

Anna passed away on June 25th of 1924 after a “lingering” illness. As part of her will she left very specific instructions to be followed after her death, including a request to be laid to rest in a royal purple casket, and that her funeral procession be headed by a brass band, the latter of which was not respected by her loved ones. She was buried in the Riverside Cemetery next to her first husband Frederick.