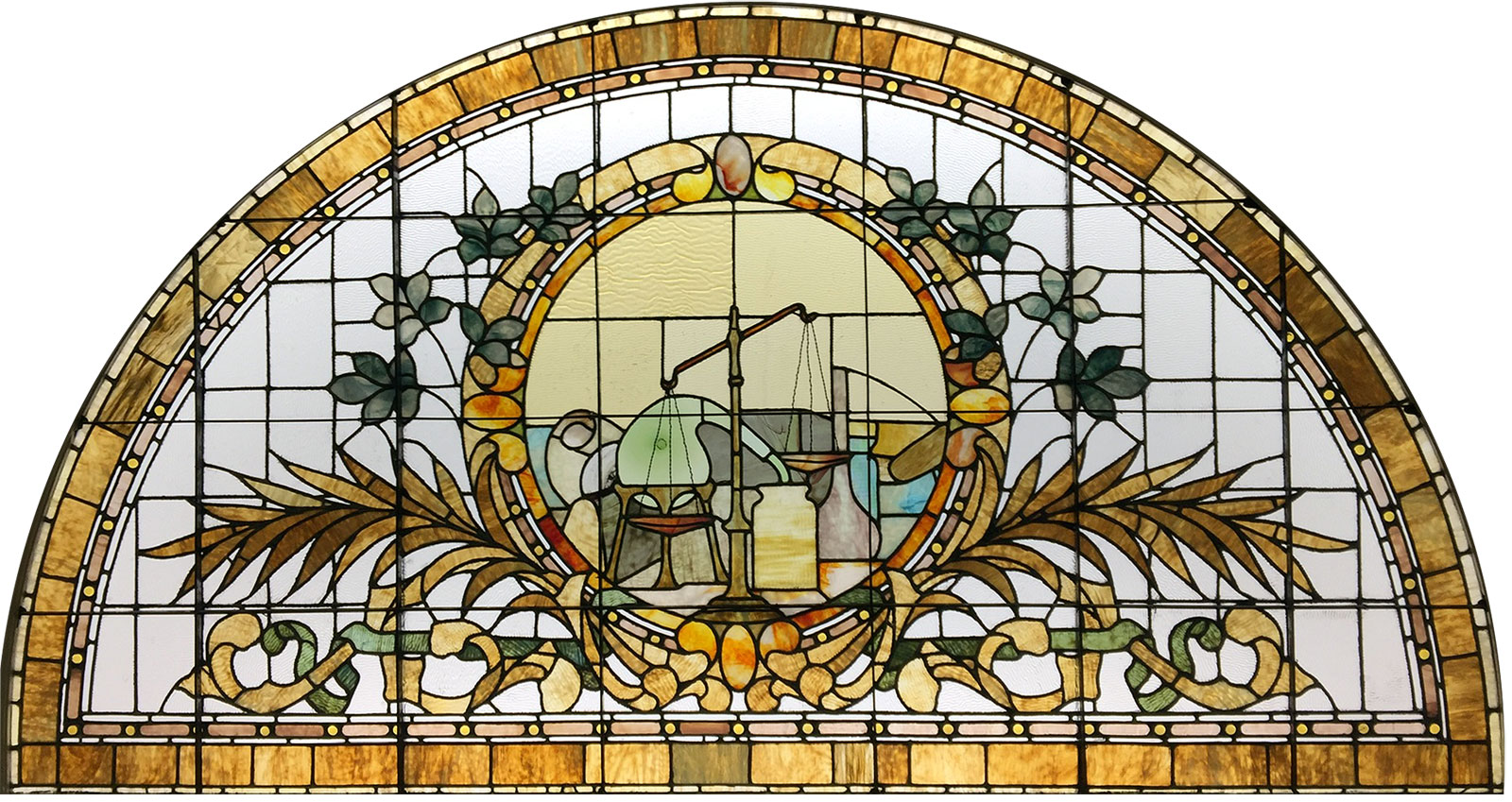 The story of Kalamazoo Public Library’s beautiful stained glass windows is a story of connections and continuity.

When the original Kalamazoo Public Library building opened in 1893, it contained 81 mosaic windows designed by Edward J.N. Stent, who also designed the stenciling and other decorative items for the building. Stent was a New York designer well-known for his church interiors.

Born in England, he had studied under William Morris, a leader in the nineteenth century English Arts and Crafts movement. Stent originally came to Kalamazoo to design the interior of the present St. Luke’s Episcopal Church. It is likely that he knew of Kalamazoo from working with New York architect Richard Upjohn, who was a cousin of the local Upjohn family, and had designed the previous St. Luke’s Church on Main Street, which was completed in 1848. Dr. Edwin Van Deusen, who donated the money for the first library, was on the vestry of St. Luke’s at the time the present church was built. Apparently he liked Stent’s work and suggested that he be engaged to design the library interior.

Stent’s beautiful windows graced the library building for more than sixty years. The windows were of various sizes, shapes and designs.  Some were set in the exterior walls; others surrounded interior doorways. They were made of opalescent glass, of varying density, translucency, and semi-transparency, and were predominately geometric in design. The art had only recently been revived from a medieval process. J. Stanley Brothers, a recognized local authority on glass, said in a 1958 article that the library windows were “superior in many respects to the numerous examples that were made in both Europe and America….”

When the library building was demolished in 1958, most of the windows were sold for salvage, but several fine examples were carefully crated by Corwin Rife, the curator of exhibits for the Kalamazoo Public Museum, which was then still part of the library. They were placed in storage behind the shelving for the museum’s collection in the new library building where they stayed unnoticed for more than thirty years.

In the mean time, Rife’s son Jamie had become a stained glass artist and was commissioned by the library in 1990 to design and fabricate a quartet of colorful glass panels depicting scenes from Mother Goose, The Little Mermaid, Rip Van Winkle, and Alice in Wonderland. These hang from chains in front of the Rose Street windows of the Children’s Room, where they delight passers-by as well as library patrons.

Old and New Come Together

In 1996 when the Kalamazoo Valley Museum was preparing to move out of the library into its own new building, the older windows were uncovered during the packing process. Library staff drew them to the attention of architect David Milling, who loved them and incorporated them into his design for a remodeled and expanded library building. Jamie Rife, who recalled his father talking about crating up the windows nearly forty years before, carefully unpacked them and restored them in his studio with the help of a grant from the estate of Ruth Scott Chenery.

Three large semi-circular windows from the original library are now installed in the present building. One, with a central design representing chemistry, acts as a landmark outside the Clarence L. Miller Family Local History Room. The other two, representing engineering and geography, decorate the Van Deusen Room on the third floor.