What is a public school education? Most United States citizens today think of kindergarten through 12th grade, provided by the government and funded by taxes. However, that was not always the case. A lawsuit known as the Kalamazoo School Case played a major role in defining public school education in this country.

While educating the children of Kalamazoo began with the earliest settlers, the extent of public school education was originally limited to “common” school, what we now think of as elementary school. The Michigan Legislature passed a law in 1859 that authorized school districts of more than 200 school-age children to elect school boards to govern their districts. These boards had the authority to set up high schools funded by local taxes, if citizens of the district voted in favor of the proposal. In anticipation of the legislature’s passage of the law, but without a vote of local citizens, Kalamazoo established its first high school in 1858. 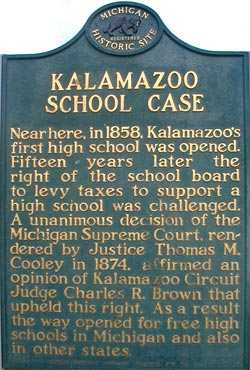 Kalamazoo Union High School, which many believed to be a necessity for bridging the gap from common school to university, operated with some minor opposition, until 1873. In January of that year, three prominent Kalamazoo property owners filed a suit intended to prevent the school board from funding the high school with tax money. They argued that the 1859 state law had been violated when the high school was established without a vote of the taxpayers. Charles E. Stuart, a former United States Senator from Michigan, along with Theodore P. Sheldon and Henry Brees, initiated the suit. At the time, it was believed to be a “friendly” suit intended to settle the issue legally in favor of the school. However, Stuart’s comments to the Kalamazoo Board of Education years after the suit had been settled, suggest that he and his companions sincerely resented the tax burden that the public high school placed on them. Stuart, like many others of his time, believed that a common school education was sufficient for anyone, and anything beyond that should be paid for privately.

Unfortunately for Stuart, the jurists who decided the case did not support his view. Circuit Court Judge Charles E. Brown found in favor of the school board, and the case was appealed to the Michigan Supreme Court. Justice Thomas M. Cooley, internationally known and respected, wrote the court’s response. He upheld the decision of the Circuit Court, finally settling the question of public financial support for high schools in Michigan.

Although this issue had been heard by other courts, Justice Cooley’s prestige helped to make the Kalamazoo School Case a leading decision that was cited in many courts in surrounding states. In Michigan the effect was profound. The number of high schools in the state increased from 107 in the early 1870’s to 278 by 1890. A plaque in front of Old Central High School commemorates the Kalamazoo School Case.

The Michigan Search for Educational Standards