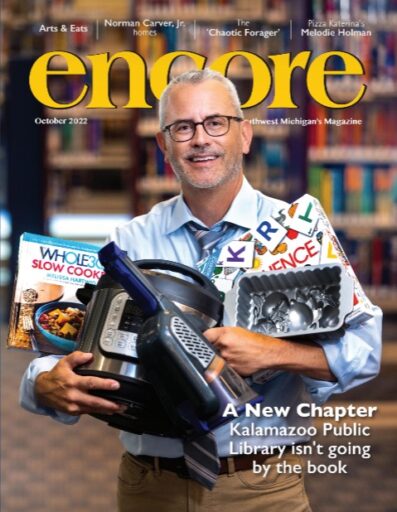 Kalamazoo Public Library is the featured story for the October issue of Encore Magazine!

Kalamazoo Public Library is celebrating 150 years of service to Kalamazoo. This October issue of Encore highlights some of the innovative services KPL has offered the community over the years.

From its beginnings as a school library that was open just one hour a week to a showplace deemed “Library of the Year” in 2002 by Library Journal, the Kalamazoo Public Library has evolved in its 150 years in ways most people might not expect.

The library system, which has four branches in addition to the Central Library, is no longer just a home for books. It has become a “marketplace of ideas, the community’s living room,” like many libraries across the globe, as reported in a July episode of CBS Sunday Morning. That episode featured libraries across the country that have added features like cafés, sewing rooms, podcasting booths, and augmented reality equipment, and KPL is right in step with the changing face of public libraries. Read more…