Family Storytime
Read Along!
Outside Storytime

“Books Wanted for Soldiers” was the Kalamazoo Public Library’s (K.P.L.) request to the public in August 1917. Through its membership in the American Library Association (A.L.A.), which was named an official “War Charity” by the U.S. War Department, K.P.L. promoted and worked to collect materials and funds for the building and supplying of libraries for the troops. In 1917, Miss Isabella Roberts strove to lead two campaigns, and in 1918 through the spring of 1919, the new head librarian, Miss Flora Roberts, guided the campaigns. Both librarians faced the immense challenge of promoting a new charity in Kalamazoo, competing with older established local organizations, all collecting for the same cause – to help supply entertainment for the U.S. troops going off to war. While the library’s efforts continuously fell short, it always pushed on to do what it could for the benefit of those who served.

Posters with military images, placed in local businesses and street cars, along with articles in the Kalamazoo Gazette, informed and reminded people of the campaign. Miss Isabella Roberts supplied a listing of the types of books and magazines wanted which appeared in the Gazette. Although the drive was not scheduled to begin until 24 September, people were welcome to drop off donations early at either the main library or one of the branches. Caroline Bartlett Crane, head of the local chapter of the Women’s Defense Committee, offered her support by naming their headquarters on S. Burdick as another donation site. On the morning of 24 September, articles in the Gazette officially announced the start of the campaign and the need for the public to donate both books and money. Unfortunately, during that same week, five other charity drives started, which included the Red Cross, the Y.M.C.A. and the First Liberty Loan Drive. Within two days, Miss Roberts, with approval from the War Department, postponed the library’s campaign. A month later, the library announced the new date for the campaign to be the week of 4 November. The work of the campaign was divided between head librarian, Miss Isabella Roberts, who remained the campaign director and person in charge of the receiving and sorting of the materials donated, and catalog librarian, Miss Mary Farr, who became the library’s voice in the public, making appearances at various men’s and women’s social organizations to promote the campaign and collect donations.

The week before the drive was to begin, the Gazette printed a special ad for the campaign titled “A Million Dollars for a Million Books for a Million Soldiers”. It clearly named Miss Isabella Roberts as the local head of what was part of a national drive, in which K.P.L. was to collect $2500, based on its population size, and that Miss Roberts would turn this money over to the National Library War Council to help build and supply libraries in military training camps in the U.S. and in camps overseas. The next Sunday, many pastors encouraged their congregations to support the drive. Each day after, the Gazette listed the donations of groups and individuals and the daily total. As the week progressed and donations began to fall short of the goal, the Gazette tried to shame the public into giving by saying that Kalamazoo would “fall far to the bottom of the list of American cities” taking part in this effort. While donations declined, Miss Roberts continued to work to show the importance of material donations by delivering a box of magazines to Camp Custer, and Miss Farr worked to build new relationships within the community. These efforts took the campaign into a second week.

Saturday, 10 September three organizations came to the aid of the library: the Women’s Defense Committee, the Collegiate Alumnae, and the staff at Western Normal School. All three worked to encourage contributions within their own organizations and the public. A brief increase in donations showed promise, until the Y.M.C.A. started a second fund raiser, which was supported by the students of Western Normal. Miss Farr carried the campaign into a third week, and reduced the amount wanted to $2000. The Gazette stood firmly behind K.P.L. and reported each time a shipment of magazines was sent to Camp Custer; each time Miss Farr made an appearance; and once again tried to shame Kalamazoo into contributing $16 that would bring the city’s contribution to the further reduced amount of $250. The campaign stalled at $240.39.

While Miss Farr resigned before the end of the year, Miss Roberts did state that the campaign would continue indefinitely; the library still collected books, magazines, and financial contributions.

In 1918, Miss Isabella Roberts stepped down as head librarian, and the library hired Miss Flora Roberts for the position. With Miss Flora Roberts barely in place, the A.L.A. announced a new book drive campaign for the week of 18 March. Funds donated in 1917 would buy the non-fiction materials the War Department wanted in the military libraries; K.P.L., along with other member libraries across the country, was to help collect a part of 2,000,000 books of popular fiction. Based on population size, Kalamazoo was asked to collect 5000 books. The campaign was well publicized and defined through various means. In an editorial, the Gazette listed some of the useless titles donated to the library in the past, and hoped that Kalamazoo would do better, especially with General Pershing himself promoting the need for books. The new column WAR WORK FOR WOMEN encouraged homemakers to search for donations while doing spring cleaning. Miss Roberts shared a set of slides, produced by the A.L.A., with the “local motion picture houses” that showed donations made at libraries across the country. The library had coupons printed in the Gazette that said, when turned in, the library would come and collect the books. In one week, the library had only 500 books. After Miss Roberts extended the campaign for two more weeks and pleaded with civic groups for donations, the library did receive 1600 books. A phone campaign tried to bring in more, with little success. Although the national drive had ended, Miss Roberts declared that the campaign would be on-going indefinitely and asked people to contribute “every book that can be spared…that the soldiers and sailors away from home may not be deprived of the pleasure of reading.” 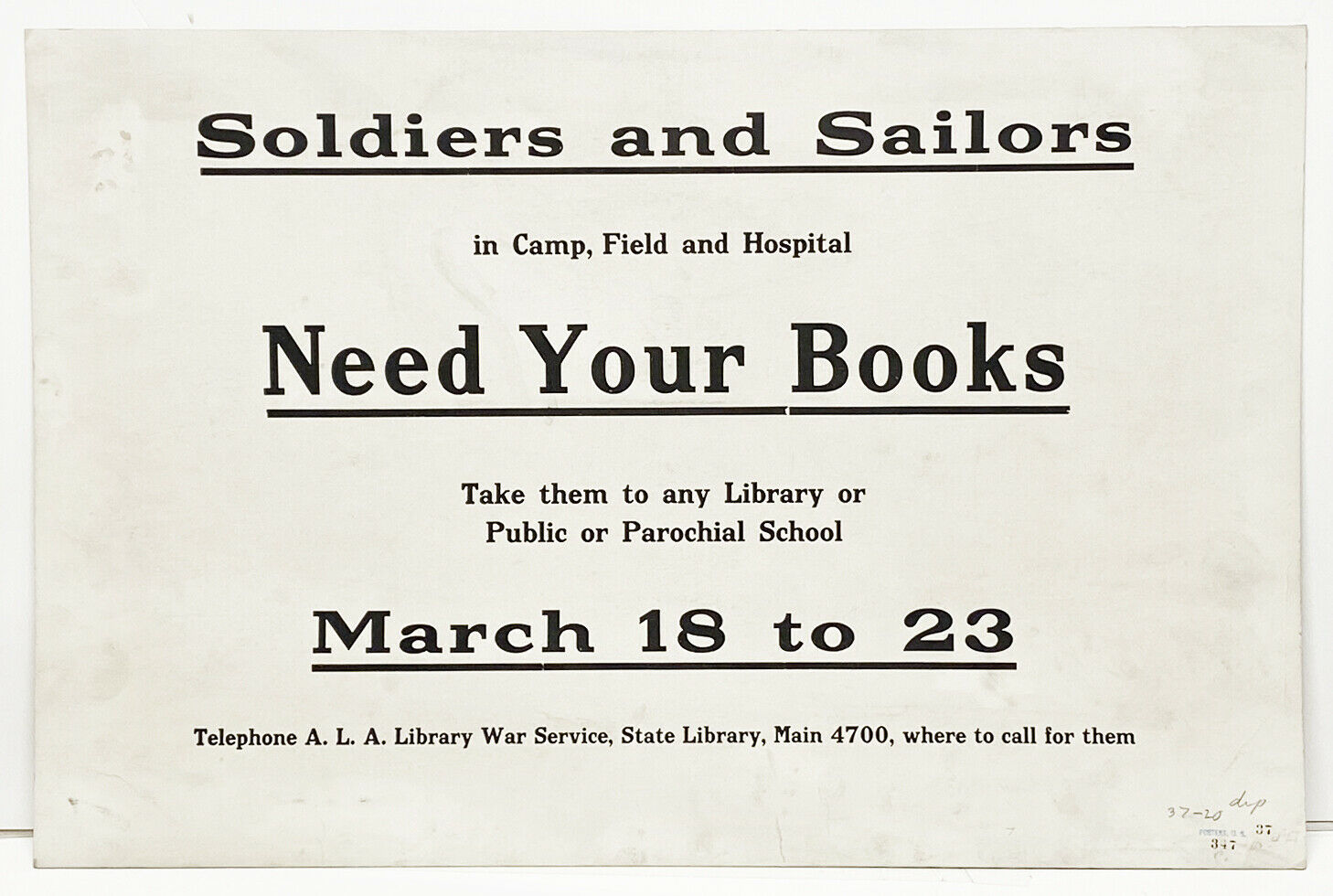 At the end of the March campaign, before Miss Roberts turned the books over to the A.L.A., she personally went through all the books and magazines to find suitable materials for the soldiers preparing to head overseas from Camp Custer. Miss Roberts steadfastly spoke of the need for more donations to help prepare “gifts” for each of these soldiers. When the soldiers left in May, each found a book and a magazine on their seat to help them with the journey ahead. While the camp librarian expected the soldiers to share the materials and then deposit them at a Y library overseas, Miss Roberts said that if a soldier chose to keep his gifts, that was fine.

Another A.L.A. campaign was set for the week of 11 November. Miss Roberts set K.P.L.’s goal at 1000 volumes. A campaign promotion of posters and promotional bookmarks helped to bring in 200 books before the official start. However, talks of peace and the eventual Armistice canceled the drive in Kalamazoo. Miss Roberts put out the word that the need for books was still great. Working with the Y.M.C.A., the library collected materials for courses the Y would teach to the soldiers to help them prepare for a return to civilian life.

On New Year’s Day 1919, Miss Roberts and four other librarians spent the day at Camp Custer’s hospital library classifying vocational books and training manuals. The request for donations from the public, Miss Roberts said, would continue for as long as the librarian at Camp Custer asked for them. She told Kalamazoo to bring in their donations until the camps were empty. Within a month, the campaigns ended.

When all had quieted down, and Miss Roberts was able to review the library records, she announced that Kalamazoo had supplied 3,073 books to soldiers, sailors, and merchant marines. From that number, three-fourths went to Camp Custer and the remaining to the A.L.A. for shipping overseas. According to Miss Roberts the “good literature furnished by the library associations of the country accomplished more toward preserving the morale of the soldiers than any other means outside of military action and the natural desire to do everything possible for home and country.”

“Books for Soldier Boys Are Sought by Kalamazoo Library”

“Kalamazoo to Raise $2,500 Library Fund During Week of November Fourth”

“As the Public Learns about the…”

“In aid of the Library War Service…”

“Libraries for Our Soldiers and Sailors!”

“Women Get Behind Library Fund”

“Load of Magazines Taken To Custer”

“Want Books for Men In Service”

“Many Books Are Given for Sams”

“Hurry with Books for Service Men”

“Books to be Given Custer Soldiers”

“Send Your Books To Men Overseas”

(KPL does not own this title, but may be available through Melcat)