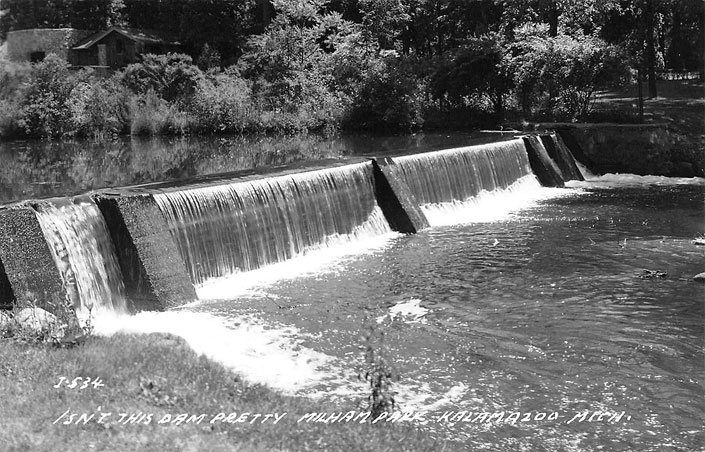 John Milham arrived in Kalamazoo from New York state in 1845 and purchased a tract of wild land two and a half miles south of the village. Only three years later he had improved that land so much that he was awarded a prize by the Kalamazoo County Agricultural Society for having the best farm in the county. Clearly an energetic man, he still found time to participate in business, political and religious affairs in town, and had 16 children by three of his four wives. By the time of his death in 1885, his farm had grown to more than 400 acres.

In 1910 the City of Kalamazoo purchased a 60-acre parcel of land from his estate for $5,000. It was developed as a public park and opened to the public in 1911 as John A. Milham Park. The first day more than 5,000 people visited the park, and its popularity has continued ever since. In 1971 it was estimated that well over one-half million people a year visit Milham Park. With the additional purchase of adjoining acreage over the years, it now consists of approximately 120 acres.

The original purchase consisted of a plot of trees with a silvery creek winding in the shape of a horseshoe through the place. Then city park commissioner William LaCrone, for whom LaCrone Park on W. Paterson Street is named, began improvements immediately. Roadways were constructed, and swings, slides and merry-go-rounds were installed. Between five and six thousand revelers enjoyed the first Labor Day after the park was opened.

In 1921 a tourist camp was added on the northern side of the creek under the supervision of the Kalamazoo park department. Several acres of wooded land were developed to meet the needs of tourists, and gained a nation-wide reputation for excellence. Originally, the tourist camp was free. Later, however, a charge of 25 cents per day for the first three days was levied and 50 cents per day after that to discourage abuse by “squatters” who stayed there the entire summer and sponged off the city’s resources. Police protection was provided during the night hours. During 1923, over 33,000 persons stayed at the camp. The majority of visitors came from surrounding states, but they also came from every state in the union and some from as far away as New Zealand and Scotland. The camp closed in 1930 because it was overrun by people who were out of work during the Depression. 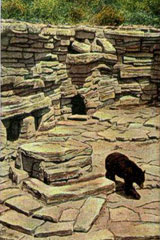 1926 saw the beginnings of what would become a popular attraction at Milham Park…the small zoo and various other animals that roamed the property. The Joseph P. Westnedge Post, American Legion, voted to acquire two buffalo for the park. These were added to the small menagerie of peacocks, foxes, owls, swans, monkeys, raccoons, rabbits and black bears that were kept on the property. The city and the park commissioner worked diligently with the state to turn the park into a wildlife preserve, especially as a bird sanctuary. It was reported that Milham Park was ideal from the standpoint of topography, for bird culture and care.  By 1927 it became necessary to construct a building large enough to house the animals and to provide heat during the winter. This animal building was expected to cost $6,000 and to be run year round.

Reptiles at the Zoo

A reptilium was added to the zoo in 1935, under the direction of 16-year-old Larry Tetzlaff, who later became widely known as “Jungle Larry,” a herpetologist, lecturer, game hunter and animal show owner. He exhibited his large collection of snakes and demonstrated the milking of venom from rattlesnakes. He and his snakes moved on to the New York World’s Fair in 1939, where he became the curator of reptiles.

The End of the Zoo

By the mid-1970s, however, the exhibits had dwindled to a few bears, raccoons and monkeys. Finally, only the bears were left, and they fell prey to sadistic vandals. Although most park patrons enjoyed watching the creatures, others abused the bears by throwing them lighted cigarettes when they begged for food or by throwing rocks at them. The bears often cut their paws on broken glass from bottles thrown into the pit. Peacocks were stoned to death. By 1977, only one aged lame bear was left, and he was put to sleep. Despite its sad end, the zoo provided enjoyment for park-goers for nearly half a century.

Additions to the Park

Through a generous offer from Dr. William E. Upjohn, former mayor of Kalamazoo, the city commission voted in 1929 to acquire an 80-acre tract adjoining Milham Park to the east. Dr. Upjohn had recently purchased the land from John Milham and offered the city the land at half the cost he paid for it. This property was eventually added to the nine-hole golf course that had already been developed for the park, and an additional nine holes were added to the course.

To commemorate the centennial of the organization of Kalamazoo County by the legislature, the Southeastern Community Club erected a two-story log cabin in Milham Park and presented it to the City of Kalamazoo in 1930. Constructed of logs and stones from each pioneer farm in the county, it was intended to serve as a museum for relics of Kalamazoo County, although it was used that way only briefly. It later housed the reptilium, and then served as a meeting place for a conservation club, and finally as a storage building. Finally, in poor condition, it was demolished in 1964.

In 1933 the Great Depression was in full swing, and needy persons on welfare rolls were given work by the City of Kalamazoo to upgrade and develop local parks, and to make river and stream improvements. Much of the stonework and terraces in the park were constructed during that time, using WPA money. The zoo enclosures, a pavilion, bridges and a bathhouse were also built during that era.

Also in 1933, Milham Park was included in the city’s parks and recreation summer programs and remained so for many years. It was open from 1:00 p.m. to dark seven days a week for that purpose, and a big attraction for the children was the merry-go-round, which operated on Saturday, Sunday, and holiday afternoons.

For nearly a century, Milham Park has remained a big draw for city residents during fair weather for hikes, leisurely strolls, family and class reunions, and a thoroughly pleasant recreation spot in the heart of the city.