The following text was compiled by John Shagonaby, David Benac, Elspeth Inglis, Pam O’Connor, Joseph Helzer, Barbara Brose, David S. Brose, and Jenifer Blouin Policelli. The original project, funded in part by the Michigan Humanities Council in partnership with the National Endowment for the Humanities, contains information provided by the City of Kalamazoo in cooperation with the Match-E-Be-Nash-She-Wish band of the Pottawatomi.

Street signs identifying the reservation’s boundaries were installed in spring of 2019. This was accomplished through the cooperation of the City of Kalamazoo and the Match-E-Be-Nash-She-Wish Band of the Pottawatomi, who have continuously occupied southwest Michigan. This will allow the Pottawatomi to tell their own story of the treaties with colonial, United States, and Michigan governments; the establishment and cancellation of their reservation; their resistance to removal; and to show their recent federal recognition.

The land cession made by the 1821 Treaty of Chicago was the first that directly affected the Ottawa and Pottawatomi who lived along the Kalamazoo River. The treaty ceded approximately 4,000,000 acres. This land today includes the Michigan cities of Grand Rapids, Kalamazoo, Jackson, Albion, Battle Creek, Niles, Three Rivers, Hillsdale, Coldwater, Adrian, Allegan, St. Joseph, and Benton Harbor; and the Indiana cities of Elkhart and South Bend.

Tracts were reserved near Dowagiac for the Pokagon Band and along the Nottawa-seppe for the Huron Band. A 9-square mile block along the Kalamazoo River was also reserved for the Match-E-Be-Nash-She-Wish Band. However, in 1827, in order to move the Pottawatomi away from the Detroit-Chicago Road, the Michigan Territorial Government reclaimed the Match-E-Be-Nash-She-Wish Reservation.

The northeast corner of the 1821 reservation was surveyed at the back wall of the interpreter’s cabin, located along the Kalamazoo River Trail. This cabin was located about 50 yards to the northeast, on the crest of the river bluff across Riverview Road, in what is now Riverview Cemetery.

The Match-E-Be-Nash-She-Wish avoided removal by moving north of the Kalamazoo River and placing themselves under the protection of an Episcopalian mission in Allegan County. The mission later became known as the Griswold or Bradley Colony, and was funded by the provisions of the 1836 Ottawa-Chippewa Treaty.

Federal recognition of the Match-E-Be-Nash-She-Wish band of the Pottawatomi occurred in the 1990s, and acknowledged the band’s continuous presence in southwest Michigan. The Gun Lake band remains a culturally and economically important participant in the region today.

The original 1821 reservation corner was located at the present-day corner of the Martin Luther King Jr./Westwood Elementary School property and Calhoun Street.

With the 1795 Treaty of Greenville, the Anish’na’abe and other tribes ceded to the United States their land east of the Wabash and Miami Rivers. First recorded in the northern Lake Huron area, by 1680 the culturally related Anish’na’abe tribes were identified as the Ojibwa (Chippewa), who had also occupied lower Michigan; the Adwada (Ottawa), who had also moved to northern and western Michigan; and the Pottawatomi, who were expanding south along the western shore of Lake Michigan.

The Match-E-Be-Nash-She-Wish and other Pottawatomi bands continued to live along the Kalamazoo River after the Treaty of Greenville. Soon after the end of the War of 1812, during which the majority of the Pottawatomi bands allied with the British, several Michigan Pottawatomi bands were involved in another treaty. This treaty was signed on September 8, 1815 at Spring Wells, near Detroit. Although Match-E-Be-Nash-She-Wish was not a signer, this treaty restored to the tribes all the possessions, rights, and privileges they were entitled to under the Treaty of Greenville and all subsequent treaties of which they had been parties.

The original corner of the 1821 Reservation was located where present-day Sheridan Street meets Portage Road.

Indian Removal and the Incorporation of Kalamazoo

The Indian Removal Act was passed by Congress on May 28, 1830. This policy essentially stated that all American Indians would be moved to reservations west of the Mississippi River. Several bands of the Pottawatomi, including the Match-E-Be-Nash-She-Wish, escaped removal. However, others were forcibly removed to present day Kansas and Oklahoma. This has been referred to by historians as the Pottawatomi Trail of Death.

Kalamazoo County was organized by an act of the territorial legislature and approved by the governor on July 3, 1830. The town of Bronson was officially designated as the county seat on May 1, 1831. Five years later, an influential group of men in town, dismayed by the apparent eccentricities of Titus Bronson (accused, tried, and convicted of stealing a cherry tree), had the name of the town changed to Kalamazoo.

The original southwest corner of the 1821 Reservation was located at the present-day junction of Kensington and Wellington streets. 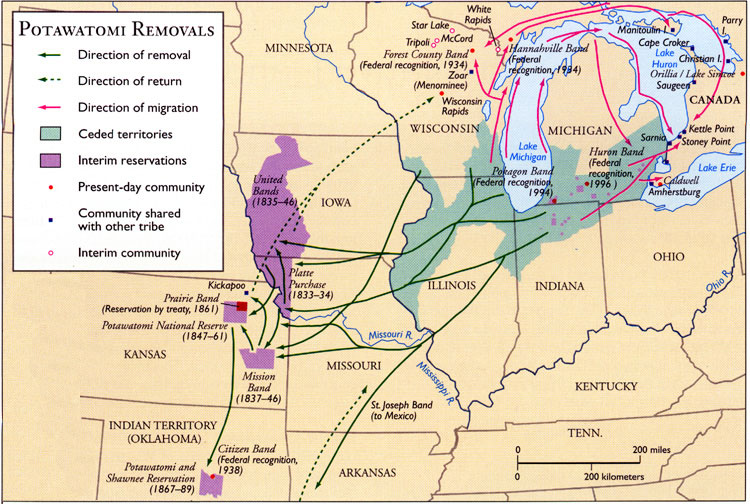