Following closely in his father’s footsteps, Desenberg later became an astute businessman with an ability to make things happen. His immense talent and inherent drive helped awaken the cultural awareness of this young Midwestern community.

But second only to Eddie Desenberg’s love of music and art was his compassion for children, especially those less fortunate. To that end, his lasting legacy was to create a place that would help make life a little bit better for the “kiddies” of Kalamazoo.

Born in Kalamazoo on September 9, 1867, Edward B. Desenberg was the son of Bernhard L. Desenberg, a successful local grocer, and Bertha L. Schuster Desenberg. While still in high school, Eddie Desenberg, became an accomplished pianist, and began performing for society and literary functions, including numerous programs at the Ladies Library. While still a teenager, Desenberg performed a piano piece for the Kalamazoo College commencement exercises in 1886, and gave one of his popular xylophone performances during the Kalamazoo High School commencement in 1889. In fact, Desenberg was the first person in Kalamazoo ever to play such an instrument.

With a desire “to cultivate his rare talent for music,” (Gazette-News), Eddie Desenberg traveled to Germany with his father in 1883 to study music at the Conservatory in Leipzig. In April 1890, Desenberg boarded a train for New York, where he would again set sail for Europe to study music in Berlin. For more than two years, Desenberg studied with Alfred Heinrich Ehrlich (1822-1898), professor of music at the Stern Conservatory of Music (Stern’sches Konservatorium, later Berlin University of the Arts) and with Oscar Raif (1847–1899), a known composer and a professor at Stern’s, and at the Royal Academy of Berlin. During his time in Berlin, Desenberg also studied composition with Wilhelm Taubert (1811–1891), a music instructor at the Royal Academy of the Arts.

By October 1892, Desenberg was back in Kalamazoo performing with the Academy of Music Orchestra, while giving piano and musical composition instruction from his residence at the corner of Lovell Street and St. John’s Place.

Ed Desenberg’s desire to contribute to the “greater good” of his community was evident early on. In January 1893, Desenberg took an active role in a “Grand Charity Benefit for the Needy” at the Academy of Music, where he became close friends with Henry Marcus, a noted violinist and then director of the Academy of Music Orchestra. Marcus and Desenberg would perform together often, either as a duet or as part of various ensembles, and both were actively involved in many of the local charity minstrel shows organized by C.Z. Bronson and O.H. Gibson.

During the years after 1900, Desenberg became noted for his illustrated lectures. Most were scholarly in nature, about art and music (the life of composer Richard Wagner, for instance), while others were clearly more for entertainment. But “proper” was a very important distinction at the turn of the twentieth century, especially in smaller communities, and apparently some (well, at least one) thought that Desenberg’s illustrations went a bit too far. 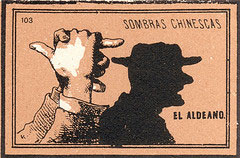 While presenting a program of shadowgraphs (hand-created shadows set to music with a phonograph) in Lawton in 1900, one writer evidently felt that Desenberg had crossed a “proper” line and blasted “the legal guardians of Lawton’s sensitive morals” (elected officials) for allowing it to happen.

“Picture followed picture on the illuminated screen, the motions of the characters keeping time to the melodious strains of a graphophone… In the shadow pantomime the kisses and embraces of the silhouette lovers were reprehensibly ardent and lingering, and well calculated to reduce the moral principles of the spectators to tatters. This is more inexcusable when we remember that the manager of the talented company of shadows has the privilege (by which, evidently, he has not profited), of living in a city where the drama is strictly censored by an alert and discriminating board of aldermen.”

“At home, no doubt, Mr. Desenberg is obliged to give his shocking exhibition in strict privacy, with guards at the doors. Is it right for him to take advantage of our unprotected condition and publicly set our pulses afire with Nethersole kisses and soulful Saphoid embraces? And back by the door stood the police force with a smile on his shameless lips.”

While the writer obviously found parts of the program to be a bit too much, the audience loved the performance. The times were indeed beginning to change.

“E.B. Desenberg has received word from Conductor Rosenbecker of the Chicago Symphony orchestra that the orchestra will play his ‘Kalamazoo’ two-step in their concert here next Monday afternoon. This is a great compliment to Mr. Desenberg and is done at the request of several Kalamazoo music lovers.”

During the 1890s, Desenberg joined his father’s lucrative wholesale grocery business, where he would remain until 1909, though he was never far from his music. By 1899, Desenberg was president of the Kalamazoo Conservatory of Music and a respected music columnist for the Kalamazoo Gazette. As organist and choir director at Temple B’nai Israel on South Street, Desenberg would often contribute his talents to solo and ensemble performances there and elsewhere throughout the city.

A director of the Kalamazoo National Bank by March 1911, Ed Desenberg was elected president of the Kalamazoo Orchestral Association, a professional organization formed in direct response to the success of the newly organized Kalamazoo Symphony Orchestra. A month later, Desenberg became treasurer and general manager of the School of Applied Art in Battle Creek.

In September 1911, Ed Desenberg and fellow union member Chester Bronson petitioned the city council to repeal a local ordinance that prohibited paid Sunday performances, with the hope of creating a series of concerts by the newly organized professional symphony orchestra. The appeal failed, as did the orchestra.

In 1901, the call went out among established musicians to abolish ragtime music (just as it did in the 50s to abolish rock ‘n’ roll, disco in the 70s, rap in the 80s, etc.; obviously some things never change). “Rag-time music is immoral, obscene, degrading and unworthy of production!” said the Chicago Federation of Musicians.

In response, several Kalamazoo musicians weighed in on the topic. As a respected local composer, Eddie Desenberg had this to say… “I can’t say I’m in favor of abolishing it. In the first place it couldn’t be abolished and in the second I’m not sure it ought to be. Syncopated music is a fad, and like every other fad will run its course and die and be supplanted by something newer. In the mean time, what’s the use of worrying? It isn’t doing any harm. This talk about it degenerating the public taste is nonsense. Light music isn’t any worse than light literature or light vaudeville. The tendency of the times is for lightness in everything, but will recover from it and welcome the return of the legitimate” (Gazette)

While little is known about the full body of Edward Desenberg’s compositional work, the pieces we do know about were clearly of great importance within the community during their time. Each piece was prominently featured and audiences remained enthusiastic about what they were hearing wherever Desenberg’s work was performed.

The Fine Art of Philanthropy

“…success is due, without a doubt, to a man whose heart and soul are in the work…”

“Since 1916 when Mr. Edward Desenberg founded Pretty Lake Vacation Camp, the mission has been to provide a cost-free summer camp experience to the at-risk youth of Kalamazoo County. As we enter our 95th summer, we continue to focus on this mission.”

While music was undoubtedly Eddie Desenberg’s first love, his compassion for children, especially those less fortunate, was a close second, and would indeed prove to be his lasting legacy.

Mrs. Bertha L. Desenberg, Eddie’s mother, was instrumental in bringing the Fresh Air School movement to Kalamazoo. The idea of open-air schools originated in Great Britain about 1907, and came in response to illness brought on by malnutrition, poor living conditions and tuberculosis. To improve the health of children who were too sick to attend school, the movement emphasized the importance of education in an environment of fresh air, exercise and adequate nutrition. As part of her effort, Mrs. Desenberg arranged a two-week encampment during the summer of 1915 at West Lake near Kalamazoo for twenty-one needy local children.

When Ed Desenberg was asked to deliver an extra tent to the location, he was aghast when he saw that the pump for drinking water at the cottage they had rented for the children was located just a few feet from the outhouse. Realizing for the first time the importance of his mother’s work, Desenberg immediately set out to solicit financial help from able community members to build a safe, permanent camp for the children. Within six weeks, Desenberg was able to raise $6,000, the amount necessary to establish a fresh air camp at Pretty Lake, located southwest of Kalamazoo, complete with suitable sleeping quarters and proper water and septic systems.

Opened in 1916, the Pretty Lake Fresh Air Vacation Camp provided 15 children with six weeks of summer camp away from the dirt and heat of the city. Within two years, the facility had grown to accommodate 35 children during each two-week period. By 1923, more than one hundred needy kids were able to stay at the camp during each of the five two-week periods — 500 kids each summer. Since that time, the Pretty Lake Vacation Camp has “provided a cost-free summer camp experience to nearly 50,000 at-risk youth from Kalamazoo County.”

Desenberg remained a Kalamazoo resident until 1930, when he moved to Chicago, though he always identified himself as “a Kalamazoo man” (Gazette). He retained a close association with Pretty Lake and spent each summer at the camp until his death in 1940 at the age of 72. He is buried at Mountain Home Cemetery in Kalamazoo.

Pretty Lake Vacation Camp: “Since 1916, Pretty Lake Camp, a non-profit community organization, has provided a cost-free summer camp experience to over 60,000 youth from Kalamazoo County who can benefit most from the experience.”