A public meeting of the Board of Trustees is being held on Tuesday, October 4, at 5 pm at Central Library/Van Deusen Room. 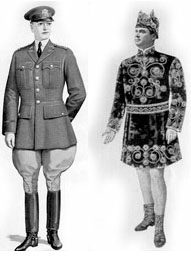 One of the country’s leading producers of uniforms and regalia, the Henderson-Ames Company of Kalamazoo, Michigan, served lodges, secret societies, and other social organizations for forty years. Frank Henderson first moved to Kalamazoo from Dowagiac in 1860 and formed a saddlery business with Charles Brown in 1866. After buying out his partner a few years later, Henderson expanded his business in 1868 by adding uniforms and regalia. Henderson formed a new partnership in 1870 with T. F. Giddings, but the two partners split three years later; Henderson maintained the new regalia division while Giddings kept the saddlery division.

In 1893, the Henderson-Ames Company was officially formed when Henderson consolidated with the Chicago branch of the Ames Sword Company in Chicopee, Massachusetts. Awarded the medal and diploma for excellence of quality and design at the 1893 Columbian Exposition in Chicago, the company quickly made a name for itself. In 1895, Henderson moved to a new home (Henderson Castle) on West Main Hill overlooking Kalamazoo. He died in 1899, so he did not live to see the scandal that undermined his company following the Spanish-American War. The company had purchased large quantities of unused militia uniforms at salvage prices, and after a few minor alterations, sold them back to the State of Michigan at full price.

The company survived the scandal, and in 1900 built a five-story factory on the corner of W. Main Street (today Michigan Avenue) and N. Park Street. It dominated that intersection until it was razed in 1940. The company manufactured uniforms during World War I, and enjoyed great prosperity in the early part of the twentieth century. By 1924, it maintained over $1 million of business a year, but the great depression took its toll. In 1933, the Henderson-Ames Company merged with another regalia firm, the Lilley Company of Columbus, Ohio, to form the Lilley-Ames Company. Operations were soon moved to Ohio, effectively ending the company’s affiliation with Kalamazoo.

The Henderson-Ames Company manufactured uniforms, regalia, ceremonial swords, flags and emblems for fraternal organizations, secret societies, bands, police and fire departments, railroad workers, and even the United States military. Although it has been out of business for more than sixty years, many of its products–particularly its swords– have become heirlooms and collectors items, which continue to carry the company’s legacy all over the world.

Compendium of History and Biography of Kalamazoo County, Michigan

Kalamazoo: The Place Behind the Products

“Those were the firms that were”