In 1929, The Kalamazoo Trust and Savings Bank announced plans for the construction of the 15-story building. A year later, Kalamazoo National Bank and The Kalamazoo Trust and Savings Bank merged due to the instability of the financial sector after the stock market crash. In February of 1933, the banking crisis intensified after Michigan banks close for eight days. In September of 1933, Dunlap C. Clark was elected president of American National Bank, stabilizing the local banking industry for the next decade.

“The characteristic features of Art Deco reflect admiration for the modernity of the machine and for the inherent design qualities of machine-made objects—e.g., relative simplicity, planarity, symmetry, and unvaried repetition of elements. Art Deco objects often showcase simple, clean shapes, usually with a “streamlined” look; ornament that is geometric or stylized from representational forms such as florals, animals, and sunrays”–Online Britannica 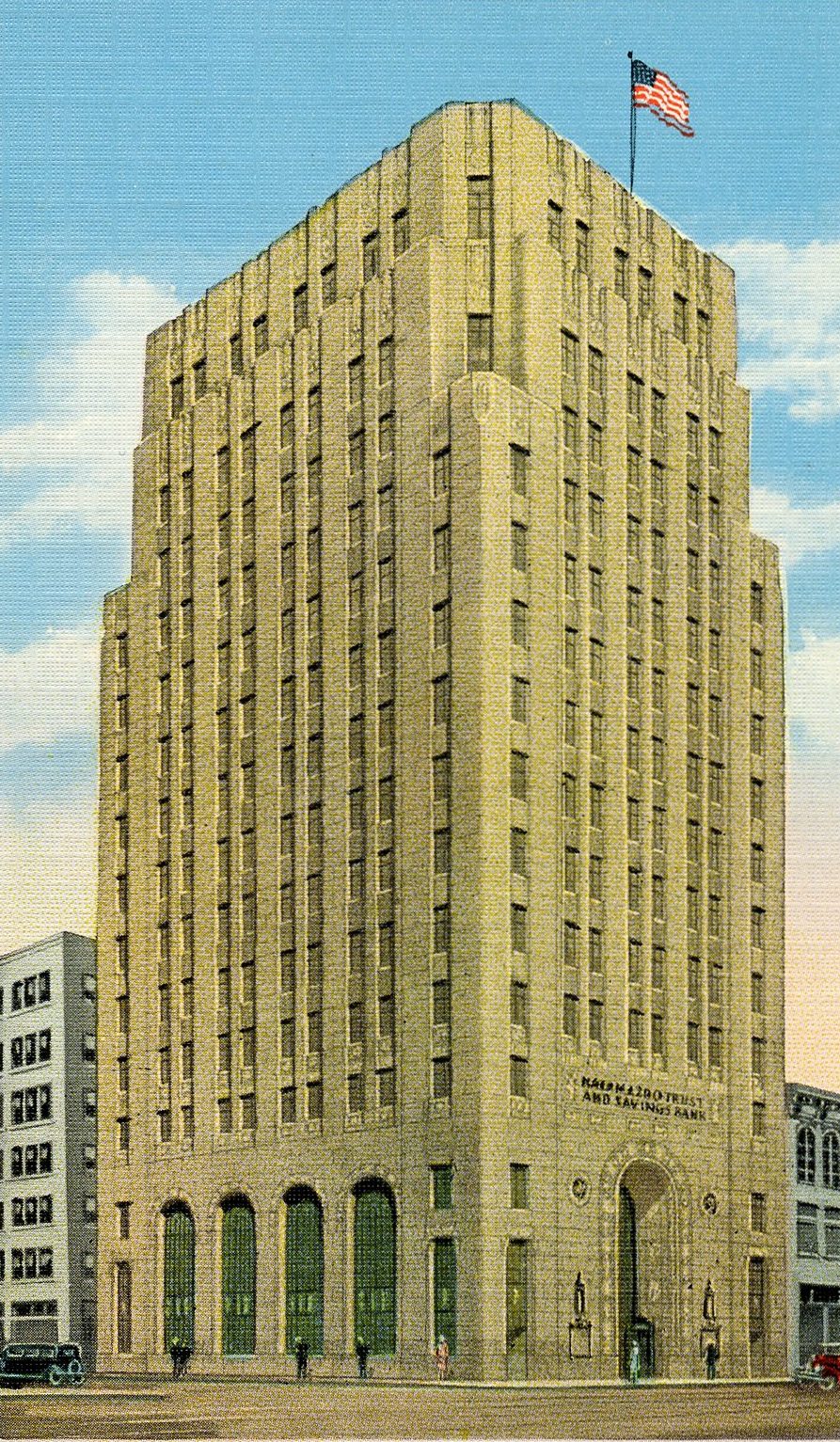 Despite the building’s location, there is no shortage of Chicago’s big city influence. Chicago architects Weary & Alford (the firm also designed City Hall) were tasked with the daring, modernist design while German-born muralist Otto Stauffenberg, who had immigrated to Chicago from Hamburg, headed up the hand-painted mural that dwells upon the lobby’s vaulted ceiling. Construction of the Indiana Limestone building was overseen by contactors Henry Vander Horst and O.F. Miller. In 1947, a fire broke out on the fourth floor, likely from rags soaked in oil and paint. Overall, six floors of the building were damaged, and repairs were estimated to cost approximately $20,000.

“The American National Bank Building demonstrates the fine capabilities of the Chicago firm of Weary and Alford to produce fine buildings in the Art Deco fashion. Using granite, limestone and lead, the structure features an unusually fine ornamented exterior. Bas relief carved geometric figures mark its irregular outline and the large arched entranceway features elaborate geometric and floral-like detailing (in a manner very similar to the work on City Hall). The exterior is further ornamented by the use of ornate Art Deco light fixtures. The interior of the bank building is equally fine. The lobby is richly detailed in stone and bronze and features hand-painted walls and ceilings in an Egyptian motif.”–National Register of Historic Places Inventory, United States Department of the Interior

Over the years, an assortment of businesses and private offices have called 136 E. Michigan home, including the aptly named hair salon called Trim at the Top, which resided on the 15th floor in 1989. The Irving S. Gilmore Foundation has had its office on the ninth floor for several years. In 1985, the office lobby underwent a restoration project, costing the bank $350,000. Architect George Zonars worked with local contractor Miller Davis Co. on the renovations. The 700-square foot ceiling saw the mural’s paint begin to fade by the mid-1990’s, and was touched up by Dave Morton. Local developer The Hinman Company acquired the building in 2019. The towering structure remains the tallest commercial building in Kalamazoo, standing at 190 feet.