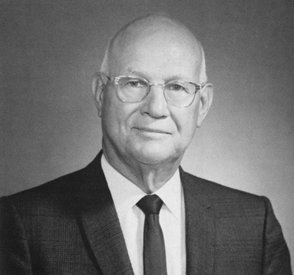 Dr. Homer Stryker is Kalamazoo’s most famous physician. He was an orthopedic surgeon, inventor, and businessman, best known for his inventions which revolutionized orthopedic care, bringing comfort to patients and convenience to doctors and hospital staff.

Dr. Stryker’s best known inventions include the turning frame, the cast cutting saw, a rubber heel for walking casts, an oscillating bone saw, and the Circo-Lectric Bed. The turning frame helped prevent bedsores by making it easier to turn immobile patients over. The rubber heel for walking casts was lighter than the cast iron heels of the time, so the patient’s mobility was better. It also made the cast easier to remove. The oscillating bone saw was used to cut the sternum during heart surgeries.

Homer Stryker was born in Wakeshma Township on November 4, 1894, and graduated from Athens High School in 1913. He attended Western State Normal College (now Western Michigan University), graduating in 1916. After teaching in a one room schoolhouse in the Keweenaw Bay school system in the Upper Peninsula, he tried to enlist in the U. S. Army. At first he was rejected due to a scarred right hand but he talked a colonel into reversing that decision, so he served in France during World War I.

With help from a physician friend who gave him a recommendation, Stryker was accepted into the University of Michigan medical school in 1919, but he taught school again before finally beginning his studies in 1921. Stryker received his graduate degree in 1925 and interned at University Hospital. After working briefly at a small private hospital in Alma, he moved to Kalamazoo in 1928. He opened a general practice on the second floor of the State Theater building in downtown Kalamazoo.

Dr. Stryker served as Kalamazoo County physician in 1929-1930 and practiced general medicine until 1936, when he returned to University Hospital in Ann Arbor to do a residency in orthopedic surgery. During his residency, he began working on ways to improve traditional procedures for moving immobile patients, and for making patients more comfortable. Upon completion of the program in 1939, he returned to Kalamazoo.

Dr. Stryker went to work at Borgess Hospital as the only certified orthopedic surgeon in the region. He had an office on the second floor and a workshop in the basement. It was in this workshop that he began to manufacture and sell some of the inventions that would bring him recognition. During World War II, his turning frame was sought after by the U.S. Army, so orders increased. Dr. Stryker hired two part time workers and began to produce turning frames and walking cast heels. His wife Mary Jane sewed canvas strings for the turning frame.

For a time during World War II, Dr. Stryker turned to the Kalamazoo Toy and Sled Company for help in manufacturing his frames. The company had been virtually shut down because of a lack of raw materials due to the war effort, so they agreed to manufacture Dr. Stryker’s frames. In 1946 Dr. Stryker formed the Orthopedic Frame Company Inc. By 1949 he had moved the company’s headquarters to Alcott Avenue.

During the 1950s Dr. Stryker worked on what was arguably his most famous invention – the Circo-Lectric Hospital Bed. The Circo-Lectric Bed resembled a small Ferris wheel. It consisted of a bed suspended between two wheels. An electric motor turned the bed to a vertical or horizontal position, as well as many positions in between. The device could be operated by the patient or a nurse. Like the turning frame, this reduced the amount of time and effort used by staff to physically move patients. Patients liked the bed because it was more comfortable, and they could operate it themselves.

In 1964, the name of Dr. Stryker’s company was changed to the Stryker Corporation. In 1969 his son Lee became president and chief operating officer. He served in that position until his tragic death in a plane crash in 1976. The Stryker Corporation is now a global multi-billion dollar Fortune 500 company, still headquartered in Kalamazoo. They have over 15,000 employees in facilities all over the world. Stryker still manufactures patient handling equipment, as well as different types of medical equipment used in orthopedic procedures, including digital imaging systems, EMS equipment, implants used in joint replacement and other surgeries, and surgical instruments. In 2008 the Stryker Corporation had net earnings of over 1 billion dollars and net sales of almost 7 billion dollars.

Homer Stryker received many honors and awards for his contributions to orthopedic medicine. In 1968 he was awarded the Presidential Citation for Meritorious Service from the President’s Commission on Employment of the Handicapped. Borgess Hospital named its new orthopedic department after him in 1972. Three years later, Borgess named its renovated nursing school building the Stryker Center. The Center was renovated again in 2005 and is now a 140,000 square foot outpatient center. In 1978 he was given the “Service to Mankind Award” by the Kalamazoo Sertoma Club.

Dr. Stryker died on 5 May 1980 at Borgess Hospital. He was 85 years old. Today, symbols of his influence remain.  Members of the Stryker family still reside in Kalamazoo and contribute to the community through donations and charitable foundations.

The Stryker Corporation is the most obvious example of his legacy. The company that had its beginnings in his basement workshop at Borgess Hospital is still going strong. The Stryker Center at Borgess Hospital and Stryker Field at Mayor’s Riverfront Park are other examples of his impact. Dr. Homer Stryker’s innovative inventions improved lives for patients around the world and left a lasting impression in orthopedic medicine.

Kalamazoo, The Place Behind the Products: An Illustrated History

Michigan Through the Centuries Vol. 3