Like so many 19th century residents who moved into Kalamazoo County, Asa Harding Stoddard’s origins began in the state of New York, near Lake Ontario. Born near the small city of Williamson, New York in 1814, Stoddard found his way to Cooper Township in 1863. Both farmer and amateur poet, Stoddard’s literary ruminations expressed the hardscrabble existence of a 19th century farmer, providing later historians with important insights about rural life in southwest Michigan. Historian Larry Massie summed up the historical value in reading even the worst of poetry, stating “Whether it’s good or bad is not the key. The verses may be poorly written and not very well thought out, but those stanzas can tell us some things about the area’s past. They are sources of history.” (Encore, April 1984, p.16)

“For he has been an earnest advocate of every means of grace to the best and most wholesome development of the community, and being highly endowed by nature with physical strength and daring and intellectual qualities that have enabled him to twine the club of Hercules with the flowers of rhetoric, his personal achievements in mere bodily labor and his advocacy of moral, educational and spiritual forces for the advancement of his section of the country have been potential, important and of lasting effect.”–Biographical History of Kalamazoo County, p.150 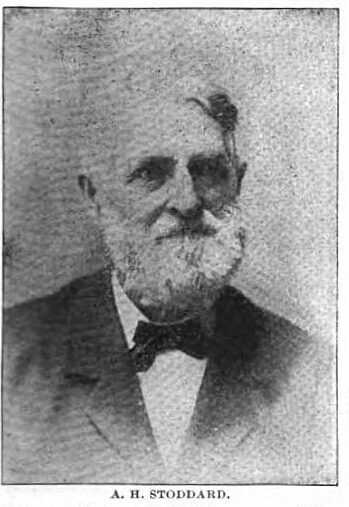 After a life of farming in the summer months so that he could afford to educate himself during the winter months, Stoddard eventually packed up with his wife Laura Jane Sanford, a school teacher like Stoddard, and departed from New York, and headed for Cooper Township in Kalamazoo County. Little has been written about Stoddard’s creative motivations, but whatever the source that drew him to take pen to paper and chronicle farm life, posterity has been left with descriptions of late 19th century life around Kalamazoo. For example, Stoddard laments the cruelties of poor health brought about by midwestern weather in his poem The Ague (a version of the flu), wherein which he references “the plank”, a colloquial term for the north/south trail between Grand Rapids and Kalamazoo that would one day make up U.S. 131 freeway.

Wrenches my joints with awful stretches,

Bursts buttons off my coat and

Then again, what is the matter

That my teeth go chatter,

And shakes me till the windows clatter?

There’s naught this side of

Except the road they call the

Could shake me so from head to

Shaking, I to bed retire,

No warmth from thence can I

At length the freezing tide is turned,

Bedding and fire in wrath are

My shrinking flesh is scorched

My blood seems burning in my

And in my back, what awful

Oh, Thou unseen yet dreaded

That sends the evils we endure

Give Union’s foes a twelve

Stoddard was apparently a prolific writer, who when called upon by his community to compose verse for a particular occasion, delivered a work that summoned the appropriate tone and subject. In 1880, he published the collection Miscellaneous Poems. The Stoddard’s stately mansion still remains today in Cooper Township at 6055 North Westnedge Avenue.

“The Ague: Misery in Kalamazoo”