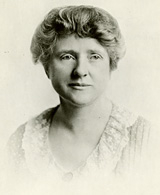 One of Flora Roberts’ favorite duties as chief librarian was writing the annual reports. She detailed the previous year’s activities, and wrote about her plans for the upcoming year. Her personality as a strong, well-educated, progressive woman shines through in these reports. She was the first formally trained library director at the Kalamazoo Public Library.

“… we must never lose sight of the fact that the print we issue is the product of the mind, and ofttimes of the soul of the writer, and it carries its message to the mind and soul of the reader; and the stuff of which minds and souls are made cannot be measured by figures.”

Miss Roberts’ driving goal was to inform people about services the library provided, in order to meet needs they may not even have known they had. To this end, she oversaw a publicity campaign. Starting in 1918, each week the Kalamazoo Gazette published an annotated list of around one dozen new books the library had added to its shelves. Additionally, Miss Roberts and reference librarian Miss Jeanne Griffin gave public talks to clubs around the city to promote the library. In 1922, the library added a telephone service, in which patrons could have their reference questions answered by phone. “The best advertisement for any concern is a satisfied customer,” wrote Roberts in her 1921 annual report. She continued her publicity efforts during her entire career. Notably, she arranged the scenarios for the 1939 Kalamazoo Public Library promotional film.

Due to Roberts’ planning, the Kalamazoo Public Library offered a class which trained apprentices in librarianship. The students would then go on to work at the library, or to continue on to a more formal library school education. For six weeks in July and August each year, beginning in 1920, students learned the fundamentals of library work. In the early years, classes were taught by professors of library science, such as Florence R. Curtis of Drexel Institute, but in later years the public librarians conducted the classes themselves. Often the students would work at the Kalamazoo Public Library as part-time assistants while taking the class.

Flora Roberts was a forward-thinking woman. In her annual reports, she often wrote about the need for expanded and updated library facilities. She strongly believed that the main building was woefully inadequate and extremely overcrowded. In 1924, she added in her report that when she was hired, she had told the administration that an addition would be needed within the next five years. She created a vision of the library over the next thirty years, and what would be needed to make it come to light. She foresaw the need to purchase the Peck and Kauffer properties, and the founding of an art center (the Kalamazoo Institute of Arts) and a museum (now the Kalamazoo Valley Museum) as distinct entities not as part of the library. She believed these things would place Kalamazoo as a cultural center, beneficial to future generations.

In 1929, under Miss Roberts’ guidance, the Kalamazoo Public Library became the first library in the country to provide a film service. In cooperation with the Art Department, two years later, Miss Roberts oversaw the creation of a movie-rating system. The Kalamazoo Public School PTA found these ratings an invaluable resource.

The Great Depression led to a marked increase in activity at the Kalamazoo Public Library, and increased the work done by the staff. In 1930, Roberts wrote, “To many these have been months of anxiety and uncertainty; months when courage has been baffled, and morale at a low ebb. And so hundreds who have not been readers have turned to books this year.” People were checking out books for many different reasons, from learning new skills, to a free diversion from the problems of the time. Many patrons were using reading as an escape, and requests for help came from discouraged citizens.

Roberts reviewed her accomplishments over the past 15 years in her 1932 report. Over those years, the Washington Square Branch was built, the Peck and Kauffer properties were purchased, the Kalamazoo Museum and Art Institute were established, classroom libraries in four schools were started, and many new tools were added to the Reference Department. The local history and vital records collections were aided by funds from the Daughters of the American Revolution, and the County Historical Society. Each summer they conducted the apprentice class, and as of 1932, seventeen of those young professional women continued on to formal library school. Costs had also increased, and Roberts was involved with balancing growth in lending as well as growth in costs.

Miss Roberts retired effective July 1, 1942. In her final report she wrote, “The work has consequently expanded, harmony prevailed, and cooperation was bred in a friendly atmosphere.” She had high hopes for the future of the Kalamazoo Public Library, and was confident that future generations would be enriched by the work done by chief librarians who came after her.

Before settling in Kalamazoo, Roberts moved frequently. She was born on 26 September 1872, in Milford, Michigan, an agricultural village in Oakland County, the daughter of Elizabeth Hinckley Roberts and Ely C. Roberts. Like many early Michigan residents, her parents had roots in New York state. By 1880, Miss Roberts and her parents were living in Davison, Michigan. Her father was a grain dealer; it is perhaps this occupation which necessitated their somewhat frequent moves. Roberts did her undergraduate work at the University of Michigan, and her graduate work at the Library School of Drexel Institute in Philadelphia. Drexel was a coeducational private university; its library school is the oldest continuously running library school in the country. Miss Roberts devoted her life to education and her career. After graduating from Drexel, she moved to Evanston, Illinois, where she was a librarian at Northwestern University. Shortly after that, she worked at Michigan State College – now Michigan State University – where she set up their catalog system. 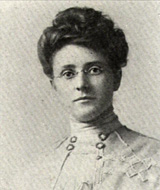 From 1904 until 1910, Flora Roberts honed her skills at State Normal School (University of Central Missouri) in Warrensburg, Missouri. She succeeded Miss Anna Powers, and “Organize[d] an unorganized collection.” She was also the secretary of the Missouri Library Association during her time in Warrensburg. Her connection to state library associations was a theme that continued throughout her life. 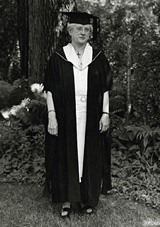 Miss Roberts loved to travel. She traveled frequently within the country for her work, and overseas for personal enjoyment. In 1927 she traveled by ocean liner to England, in 1929 to France, and in 1938 to England once again. She took these trips with her friend Ellis J. Walker, a nurse who was the director of the student health center at Western Michigan University for many years. 1928 saw her giving the graduation address to a class of thirty at the Los Angeles Public Library School.

All through her life and after retirement, Flora Roberts continued to be active in the community. In 1942 Kalamazoo College awarded her an honorary Master of Arts. An active member of the First Presbyterian Church, she also belonged to the Council of Social Agencies, the City Planning Commission, the Kalamazoo Centennial Committee, the Altrusa Club, and the Current Events Club. She died on 19 January 1957, in Northville Township, a suburb of Detroit.

Century of service: the History of the Kalamazoo Public Library

Annual Report of the Librarian

History of the UCM Library