Premiere Pro for Beginners
Haunted House at KPL featuring Dustin Pari of Ghost Hunters
Step Back in History: KPL at 150

(all sic, re-sequenced for context) 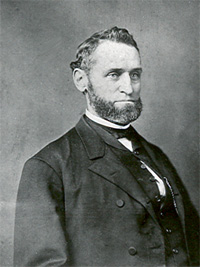 Israel Kellogg, born in Eastern New York in 1798, came to Kalamazoo in 1842. For the next ten years he served as landlord of the “Kalamazoo House”—the famous stopping place at the junction of East Michigan and Portage. He retired when the old building was replaced by a new and larger brick one. He owned a planing mill next, and, in the later 1850’s, served as superintendent of construction at the Asylum. Kellogg held his home at 605 South Street—one of the oldest surviving homes in the city—only a year, selling it in September of 1853 to a young merchant from Richland, Frank Little, who lived there for the next fifty years.

More than forty years later, Frank Little spoke at the Kalamazoo Pioneer Society’s annual picnic one summer day in 1895. In his seventies then, he recalled his first coming to Michigan. In October of 1831, just months after the land in Southwestern Michigan was first offered for sale by the government, he and his family arrived in Detroit with a party of settlers from Vermont. They traveled with horses and oxen for two weeks–stringing out across the countryside, regrouping around the campfire each night, and starting off the next morning knowing only that they were going west. Finally they arrived at one of the small prairies near Richland where they would make their home. Little remembered that “we found the interior of Michigan, prairie, oak openings and timber in the primitive undisturbed condition of nature. Not a tree cut, not a furrow plowed; not a fence, bridge, or defined traveled roadway in any direction”. He was eight at the time and soon settled down to pioneer farming.

Little was twenty-one when the harvest was finished in October, 1844. He left the farm then and established himself as a merchant, hoping to make a go of it in Grand Rapids with his Uncle Lovell Moore. Another pioneer Richland farmer, Rockwell May, gave his daughter, Cornelia, in marriage to Little in 1846. The Kalamazoo Public Museum preserves a sheaf of letters written by Cornelia in the late 1840’s and early 1850’s which testify to the strength of that marriage. Rockwell May sold his farm and stock in 1848 and opened with Frank Little a general store in Richland. Little soon became an established village merchant, learning to speak Indian dialects well enough to carry on trade with Chief Noonday’s band and others who remained after the great Indian Removal. He held various township offices as well. In 1853, however, he took a trip to the East, returning for a time to the family home in St. Johnsbury, Vermont. He was looking for another position. In the fall of that year, he bought the house on South Street.

One day in October, he and his wife and two-year old daughter, Isabel, made the journey into Kalamazoo. Francis, a second daughter, was born in 1856. Isabel married a young merchant, John Weeks, and moved in the late 1870’s to Yankton, South Dakota. Francis grew up on South Street, taught school. for a time, then married Clarence Dolson, a veterinary surgeon. They left for Iowa, but returned to live with the Littles again in the 1890’s.

Public records give no clear picture of Little’s financial situation. In 1855, Rockwell May removed to Kalamazoo and entered into the dry goods business on West Michigan near the Burdick House. Years later, after May’s death, tax records showed that Little owned the building. Census-records indicate a modest estate for Little in these early years, though he left at his death between forty and fifty thousand dollars. Whatever his economic position, however, there was no doubt that Little felt that he must participate in the responsibilities of village citizenship. Speaking at a political rally in 1880, he called it the “high privilege of every thoughtful, intelligent citizen… to do his own thinking; to follow his own conscientious convictions, and to so live, that he shall in the largest degree fulfill his obligations to God and his fellow men”. Little’s fifty years in Kalamazoo were a testimony to that belief.

He is best-remembered as instrumental in converting Kalamazoo from a village to a city – change which he advocated in the Gazette for some years. In 1883, he served as secretary of a citizen’s committee charged with writing the city charter and was responsible for the form which the charter and the bill to enact it finally took. His public service went back much further, however. In 1856, he was made Superintendent of the public schools; and in 1859, voters installed him as a member of the school board. He held the post of secretary to the board for the next thirteen years and the Public Library preserves in a bound volume, one hundred and seventy-eight pages of his handwritten minutes. In addition, he acted as the village librarian, presiding over a collection that grew in the 1860’s to some three thousand volumes under the control of the school board. He entered the Civil War period a staunch Democrat, but served in 1862-63 as draft commissioner for the county and later as secretary of the State Sanitary Fair for the relief of the troops. He served four terms as village clerk as well, and in the early 1880’s, was named to a term on the prestigious Sewer Commission.

Little strongly supported the cause of “Scientific agriculture”. He acted as secretary of the Kalamazoo Agricultural Society for thirty years; for eleven years he served as first assistant secretary to the Michigan State Agricultural Society; he was instrumental in organizing a state-wide association of agricultural societies and served for seven years as secretary of that organization. He spent three decades as statistical crop reporter to Washington from the County, and presented among other things, a special report on celery-growing which became part of the Agriculture Departments annual report in 1886. Always active in Kalamazoo’s annual county fairs, he opposed the midway atmosphere which marked many such fairs in the period after the Civil War, and steadily advocated the widest possible involvement of county farmers. He also participated in the establishment of the National Association of Grain Millers in 1874, and served for five years as secretary of that body, gaining recognition in that capacity even in England.

Little wrote logically and fluently on public subjects for most of his life. A close friend of editor Volney Haskel in the 1860’s, he found ready acceptance in the Gazette, and during Haskell’s absences from the city, Little filled in as editor. The Gazette backed the Democratic party, as did Little, and often reprinted his political speeches and general observations. He wrote for agricultural journals and other periodicals as well. The editors of Representative Men of Michigan declared in 1878 that “more clearly than most men, he sees things as they are”. They went on to say, “he regards every subject with exactitude and precision. His logic is irresistible; his observation, minute and accurate; his methods are conscientious and exhaustive… His word passes unquestioned among all; and, in his business habits and social relations, his absolute rectitude is proverbial”.

Along with his father, Henry Little, who retired to the village, Frank Little had a keen taste for local history. Both Frank and Cornelia Little prepared papers for the Pioneer Society which subsequently appeared in the Gazette or in the Michigan Pioneer Collection. Little was credited with authorship of one of the country histories so popular in the late nineteenth century in conjunction with David Fisher.

When Little passed away in November of 1903, the Gazette gave him a feature story suggesting that he was “one of the oldest, best-known and most highly respected citizens of Kalamazoo”. His wife and his two daughters survived him, as did three grandchildren. City Directories continued to list his wife and younger daughter, Francis, at the same address until 1907, when Cornelia passed away at the age of eighty-two.

The little brick cottage at 605 South Street is one of the oldest surviving homes in the city. It was one of the first to go up when Kalamazoo’s “Plat # 2” was opened in the early 1840’s. John Hogeboom, a farmer from New York, paid $.39 tax on his lot in 1846 and again in 1847. In 1847, however, he put up the Greek Revival cottage which remains largely unchanged in exterior details down to the present time. Hogeboom, his wife, Helen and their three daughters, lived in the home only briefly. In 1849, they affected a trade with William Tuttle, who owned one hundred and twenty acres in Oshtemo Township. The local tax assessor found the Hogebooms on the farm and Tuttle on South Street in the spring of 1850. In June of that year, the Census taker recorded Hogeboom as a “farmer” and found Tuttle a “carpenter”. Tuttle, his wife, Jane, and three children occupied the house until 1852. Twins, Shelby and Ella, were born to them in that year, and perhaps the little house seemed too crowded. In any event, a plat map issued in 1853 shows Israel Kellogg’s name on the property. Kellogg held the South Street property only a year, selling it in September of 1853 to a young merchant from Richland, Frank Little, who lived there for the next fifty years.

Compendium of History and Biography of Kalamazoo County, Michigan