Bedtime Stories
A Very Big Fall with Emmy Kastner
Step Back in History: KPL at 150 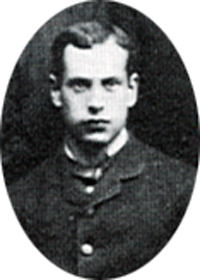 Edward Israel was born in Kalamazoo on July 1, 1859. He died almost 25 years later on May 27, 1884 in a tent at Cape Sabine on Ellesmere Island far to the north of the Arctic Circle. The story of how he came to die so young in such a forsaken place is a long and fascinating one. In fact, two full length books have been written on the subject of the Greely Expedition, of which Israel was a member. Here there is only space for a brief sketch of the life of Kalamazoo’s own Arctic explorer and the part he played in the ill-fated expedition that, for a brief time, captured the attention of the world.

Mannes Israel, Edward’s father, was the first Jewish citizen to reside in the village of Kalamazoo. He arrived in 1844 and established a dry goods store on the corner of Michigan Avenue and Rose Street. Edward’s mother was Tillie Israel. She raised the children and continued the family business after the death of her husband. Edward attended the Kalamazoo Public Schools and then continued his education at the University of Michigan. It was there, just a few months before he was to graduate in 1881, that Israel was nominated by one of his professors for a position as the astronomer on a United States government expedition to the Arctic. Israel excitedly accepted the nomination, was granted his diploma by the university, and returned home to Kalamazoo to bid farewell to his family. On 28 April 1881 Israel left Kalamazoo for Washington. He would not return alive.

The Lady Franklin Bay Expedition (also commonly called the Greely Expedition after its leader Lieutenant Adolphus Greely) was chartered by the federal government as part of a worldwide plan to send groups to the polar regions to conduct scientific experiments and measurements. Greely, Israel, and twenty three other men set out from Washington, D.C., for Newfoundland on 9 June 1881. From there they boarded a special ship that took them to their final destination at Lady Franklin Bay, well north of the Arctic Circle. From a base they christened Fort Conger, the men spent two lonely years conducting their measurements and experiments in about as much comfort as one could expect in such a frozen and barren place. Israel was responsible for taking hundreds of readings each day, including astronomical, pendulum, magnetic, and meteorological observations. The men had plenty of food, a sturdy structure to keep the elements at bay, and even some luxuries (each man was given a quart of rum on his birthday).

The first sign that something was wrong came in the summer of 1882 when the ship that was supposed to resupply the expedition failed to arrive. However, they still had plenty of provisions for the following year. Another year passed and the summer of 1883 crawled by in the never-ending daylight of an arctic summer. Supplies were beginning to run out, and so, according to a predetermined plan Greely decided to lead his men back south across the ice to Cape Sabine where they could make use of a cache of supplies and make themselves more easily rescued. It was 9 August 1883 when the men finally left Fort Conger with all the supplies they could carry loaded into small boats and set off southwards. Israel’s readings were the only way the party could determine their location on the constantly shifting ice. Without Israel the entire party would probably have been lost. Eventually the expedition reached Cape Sabine where they received the worst possible news. The relief ship had been crushed in the ice and sunk, and only a fraction of the necessary supplies had been delivered. The Greely expedition would have to suffer through another arctic winter, this time with almost no supplies and no proper shelter.

The Death of Edward Israel

Nine months passed, and all but six of the expedition members slowly succumbed to frostbite, exposure, and starvation. Edward Israel died about three weeks before the remaining men were finally rescued by a U.S. Navy ship that had managed to break through the ice. One of the survivors wrote of Israel’s passing, “Everyone was his friend. He had no enemies. His frankness, his honesty, and his noble generosity of nature had won the hearts of all his companions. His unswerving integrity during these months of agony has been a shining example; and although his sacrifices were lost to a few, still the effect has produced good fruit. For lack of strength we could not bury him today.” The members of the Greely expedition, both dead and alive, returned to the United States in 1884 amid a flurry of scandal. The failed expedition drew criticism from many who derided its politicized nature, poor planning, and leveled accusations of cannibalism against the survivors.

Edward Israel’s body was returned to Kalamazoo on 11 August 1884. Thousands turned out at the railway station to pay their respects, and the businesses of the town were all closed. He was buried in the Jewish cemetery adjacent to Mountain Home Cemetery. A historical marker was erected near his gravesite in 1972 to commemorate Kalamazoo’s Arctic explorer.