Bedtime Stories
Step Back in History: KPL at 150
A Very Big Fall with Emmy Kastner 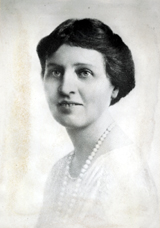 Most Kalamazooans remember Blanche Hull as the donor of the Hull Preserve adjacent to Milham Park, but that gift was only the last act in a long life as a civic and cultural leader. She came by her leadership qualities honestly. Latham Hull, her paternal grandfather, founded a private bank which eventually merged with First National Bank and later served terms as both president and treasurer of the village of Kalamazoo. Her maternal grandfather, Joseph B. Wyckoff, was president of the Harrow Spring Company, among other business interests. Her father, Edgar, was also a banker, but was killed by a tornado in Minnesota in 1886. After her mother died a decade later, Miss Hull and her sister Evelyn made their home with Frederick Rowley, their cousin and guardian, in a home on South Street that is now the Park Club. She graduated from Smith College in 1902, and after a 15 year career in social work in New York and at Chicago’s famous Hull House (no relation to her family), she returned to Kalamazoo, purchased a beautiful tract of land north of Kilgore Road and had an elegant home built there.

A curious and adventurous person, she liked new ideas and experiences.  Her love of travel led her to fly overseas on the dirigible Hindenburg and to go on a camping expedition in the desert of North Africa.

Active in the early development of both the Kalamazoo Institute of Arts and the Kalamazoo Symphony Orchestra, she is particularly remembered for her role in establishing the Institute of Arts and for helping it survive the depression and war years. She served as its first president from 1930 to 1936. A history of the organization says of her, “Miss Hull had the vision to see art as an essential expression of humanity and her concern was to have our community find itself within this. A love of art, a discerning intelligence, a sound common sense, and strength of purpose were qualities uniquely combined in her.” Her love of art extended beyond Kalamazoo as a founder and first president of the Michigan Museum Association.

Maxwell Bardeen, the husband of Miss Hull’s niece, described her as “a wonderful person to try out business ideas on. Her evaluations of people and situations were amazingly accurate. She had a very good business sense.” Bardeen was prominent in the area’s paper industry, so it was probably he who drew her skills to the attention of the Allied Paper Company, which invited her to serve on its board of directors.

She also served on the board of Kalamazoo College, which her mother had attended.  Because of her great love of children, she helped found the Kalamazoo Child Guidance Clinic–only the third in the state–and the local council of the Girl Scouts. She often invited city children to play on the grounds of her home; at her death in 1957, she left her lovely estate as a legacy to them.

“Blanche Hull succumbs at age of 78”