East side of S. Rose St., across from Academy St. (former Academy of Music).

Renovated and reopened August 31, 1919, as a vaudeville and film house (renamed Regent) by W.S. Butterfield.

The following articles, published in the Kalamazoo Gazette during the summer of 1919, give a brief sketch of the renovation work that would transform the Academy of Music into the Regent Theatre. (all sic.)

“‘The Regent Theatre’ is the name by which the Academy of Music is to be hereafter known, the popular playhouse having today been re-christened by W.S. Butterfield, who is in the city overseeing alterations and repairs which will transform the Regent into a strictly modern amusement place. And this name, Regent, will blaze out from a large electric sign.

Col. Butterfield with his architectural engineer have gone entirely over the theatre. ‘Many changes have been decided upon,’ said the colonel today.

‘The lower floor is to be entirely re-seated with opera chairs of a comfortable pattern. The seating will be extended back into the foyer, giving capacity for an audience of 650 on the lower floor alone. A change is to be made in the stairway leading to the balcony, to give additional floor space, and an inside stairway to the gallery will be constricted. The present seating in the gallery is to be discarded and the chairs removed from the lower floor substituted.

‘New scenery will be installed. The marquee in front of the theatre is to be rebuilt. The interior of the house is to be entirely re-decorated. Work on the alterations will be pushed rapidly in order that the theatre may be re-opened Sunday, September 1.’” 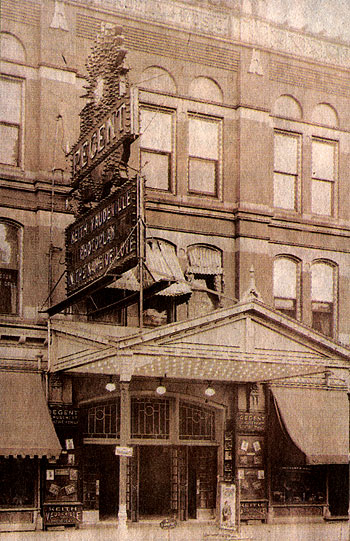 “The Regent theatre, formerly the old Academy of Music, will soon be ready to open for the coming season, announced the new manager, Roy Tillson, of Columbus, Ohio, yesterday afternoon.

‘Alterations and repairs to the amount of $30,000 have been made upon the old building in an effort to give Kalamazoo one of the most modern and most up-to-date playhouses in the state,’ he said, ‘and we expect to put on a high-class grade of vaudeville.’

The old building is being changed in a great many ways, although the seating arrangement will be almost similar to the former one. New seats are being installed and the interior of the building is being entirely re-decorated in the latest ‘Mist of the Marne’ blue.

The lobby has been finished in a beautiful creamy white, with the best of Tennessee wainscoating. A new ticket window has been installed which adds greatly to the appearance of the entrance. Inside the doors, the greatest noticeable changes are in the decorations which all add to the appearance of the play house. Two new auto boxes, one on either side, have been added. Otherwise, the seating arrangements are the same.

The beautiful painting on the ceiling above the orchestra circle representing ‘the Aurora Borealis’ has been cleaned and is in perfect condition in spite of its 37 years of age. It adds a foreign touch to the appearance of the house. The stage has also been well planned, enlarged and made more practical for the modern vaudeville companies. The new asbestos curtain is finished in the same ‘Mist of the Marne’ blue, giving an added light affect to the audience.

From a safety point of view, the new theatre is one of the best protected in the state. There will now be eleven exits from the building, which would allow it to be emptied of an audience in a remarkably short time.

Tillson, the new manager, had been with Col. W. S. Butterfield for some years. Prior to coming to Kalamazoo he was managing a vaudeville house at Olentangy Park, Columbus, Ohio. …

“A one hundred per cent comedy bill will mark the opening vaudeville to be on view at the new Regent theatre four days starting Sunday Afternoon. …

Draperies were hung and carpets laid yesterday at the Regent. Gray, gold and royal blue form the color scheme of the hangings and they set off the theatre in rich style. Today will see most of the new seats installed on the main floor. New upholstered opera chairs of latest design were ordered for the Regent some months ago but owing to delay in shipment these will not arrive for several weeks. The work of placing the new chairs will be done without interuption to the performances and installation taking place a few rows at a time after the close of the regular shows.

Several thosand dollars have been spent in new lighting effects alone. The stage will be a blaze of electrical brilliance. New border lights and numerous high powered lamps will make the realm of the theatrical folks up to the minute in every detail. New and artistic fixtures are being installed in the auditorium and foyers. …

A History of Theater in Kalamazoo

“Open Academy of Music As Vaudeville Theatre on Easter Sunday”

“To Be Known As Regent Theatre”