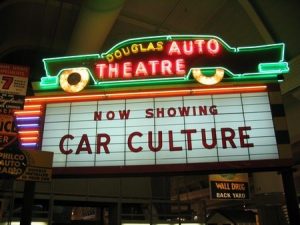 While the theater grounds and large screen no longer exist, its neon marquee, comprised of both a Model T and a modern car, proudly hangs in the Henry Ford Museum, a donation from Kalamazoo College in 1987. The theater’s luminous sign, the last vestige of a once booming form of entertainment in post-war America, was produced locally by the Mullholland Sign Company.