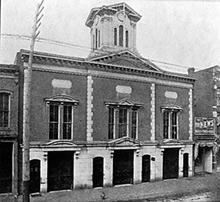 Corporation Hall, S. Burdick Street Kalamazoo Public Library Archives, uncataloged photo collection, oversizedKalamazoo Village officers first got a home of their own with the 1867 construction of Corporation Hall on the west side of S. Burdick Street between South Street and Michigan Avenue. Fire companies were located on the first floor, with additional municipal offices on the second floor.

Throughout the years, Corporation Hall also provided space for the first public library, the Ladies Library Association, and the Kalamazoo Board of Education. Although the fire and police departments moved elsewhere in the early 1900s, Corporation Hall was the seat of local government until 1924.

In 1925, the building was leased to the J.C. Penney department store, which stayed there until 1956. Since then, various businesses have occupied the building. The building has had several facades over the years, but part of the original brick can still be seen on the second story of the south side of the building.

The present City Hall was dedicated by Mayor S. Rudolph Light on September 1, 1931. It was designed in the Art Deco style by Weary and Alford of Chicago, and was erected by Miller-Davis and equipped at a cost of $524,000.

A striking feature of the interior is the mural on the walls and ceiling of the city commission chambers, painted by local artist Otto Stauffenberg.