The first hotel on the corner of East Main, today’s East Michigan Avenue, and Pitcher Street was an establishment known as the Pacific Hotel, which appeared in the 1873 city directory. It was built and owned by Pelick Stevens, one of Kalamazoo County’s early residents. Stevens was not a hotelman, rather he was heavily involved in real estate. He built and owned several commercial properties around town, all of which he rented out.

Stevens’ leased his hotel to a locally respected hotelier, Robert Horn, who later renamed it Horn’s Hotel. It operated under this name for many years. Horn died in 1879 and city directories of the 1880s list Sally Horn, Robert’s widow, as the hotel’s proprietor. A hotel run by a woman during this period was unusual. Regardless, her involvement in the business was omitted from her 1903 obituary. The modest two-story structure appears on the 1887 Sanborn map. But by that time it was listed as the Occidental Hotel.

Meanwhile, Patrick Henry Burke was making a name for himself as a local hotelier. His Burke’s Hotel on North Burdick Street, near the Michigan Central Station, prospered for years. In November 1886 he retired from the hotel business. However, retirement did not suit him and the absence of Burke’s Hotel proved short-lived. It appeared again in the 1889 city directory, albeit in a new location. Burke became the newest tenant of Steven’s hotel building. 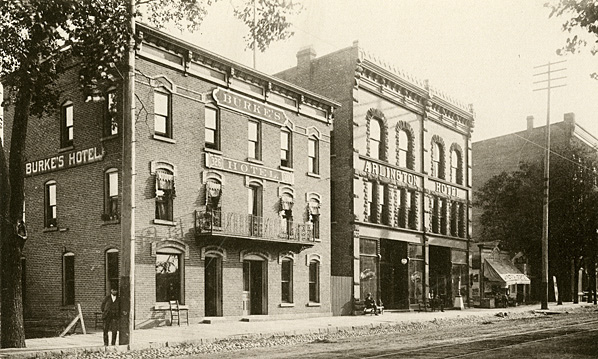 Based on period Sanborn maps, it appears that Burke either had the old building torn down and replaced by an entirely new structure or altered beyond recognition. The building was now significantly larger. The front of the hotel on East Main Street was three stories. A two-story wing extended back to the alley. The Kalamazoo Gazette informs us that it offered twenty rooms to the public. Burke’s rebuilding of the hotel was only the beginning of a steady series of physical improvements that would, in time, transform it into one of the largest and finest in the city.

On 1 February 1899 the Kalamazoo Gazette announced further changes. Adam Ehrman purchased the property from Charles M. Stevens the previous December. Pelick Stevens had passed away in 1881. The new owner promptly undertook a number of improvements to the structure, including the addition of steam heat and new furnishings. It was then reopened as the Columbia Hotel, a name that would stick for the remainder of the hotel’s history.

Adam Ehrman was a first-generation immigrant who arrived at Kalamazoo in 1882 from the town of Mosbach in Baden, Germany. The young man quickly found a place in the hospitality business, taking jobs at the American Hotel and later at the Kalamazoo House. The experience gained in those two venerable Kalamazoo hostelries eventually enabled him to open his own restaurant on North Burdick Street, prior to taking a management job of the Western Hotel. From there he would launch the Columbia venture.

The new Columbia would thrive as Adam Ehrman combined his experience, a dash of German decorative flare, and a steady stream of physical improvements to transform the hotel into one of the city’s best. Over the next few years headlines announcing major improvements to the hotel became a regular feature of the Kalamazoo Gazette. For example, the first year of business saw a flurry of activity. An additional floor was added to the rear wing and Ehrman replaced a neighboring saloon with a private park for his guests.

In 1909 Ehrman undertook his most ambitious physical improvement project to date. The park was replaced with a new addition designed by local architect F.D. Van Volkenberg. This addition extended the Columbia all the way to the street corner. As part of the work, the hotel’s original façade was removed and redone to match the new addition, creating the illusion that the structure had been built at once. When all was said and done the project added forty two guest rooms to the hotel, and gave it much of its present-day appearance. This addition soon proved insufficient to meet demand. In 1911 Ehrman purchased the neighboring Arlington Hotel and had the two structures combined under the Columbia name.

Adam Ehrman never forgot his German heritage and was an active member in the local German-American community. He made frequent trips to his hometown of Mosbach, often bringing back new immigrants to work in the hotel. However, one such trip nearly netted Ehrman a world of trouble. He and his wife were in Germany in August 1914 when World War One broke out. This caused a panic back in Kalamazoo as contact with the travelers was lost. Writers in the Gazette feared the worst.

Fortunately the Ehrmans finally returned to Kalamazoo in late September. A harrowing account of their five week ordeal was then relayed to the Gazette. Adam avoided conscription into the German Army, thanks to his U.S. passport. But then the couple faced another dilemma. They were trapped in the war zone because the sailing they had originally scheduled to take had been canceled due to the war. Thus a journey from one European port to another began as the pair desperately sought alternate arrangements. Passage on the British liner Baltic was finally secured but that ship was overloaded and conditions and food on the crossing were far from pleasant. Ehrman later joked that during the crossing he resolved to hire more cooks at the Columbia, just to satisfy his own hunger. However unpleasant the crossing, the Ehrmans were happy to return home. Once back in Kalamazoo Adam wrote a series of articles for the Gazette describing the war situation in Germany.

When Adam Ehrman purchased the Columbia, he moved his family into the hotel. As a result, his three sons were literally raised in the business. The eldest son, Frank, began working for his father at the age of twelve, gradually working his way up take over management of the hotel when his father retired 1920.The elder Ehrman eventually passed away in 1940.

Like his father, Frank Ehrman maintained the Columbia’s reputation and continued to expand and improve the facility. But Frank was not the only Ehrman son to figure prominently in Kalamazoo’s hotel industry. His brother John purchased the Rickman Hotel at Kalamazoo and North Burdick Streets in 1925 and ran it for many years. Meanwhile, another brother, Leo, worked with Frank as an assistant manager of the Columbia.

The prosperity of the 1920s was reflected in the improvements Frank Ehrman made to the hotel. The most ambitious of these occurred in 1923 and 1928, when two large five-story wings were added to the rear of the building. A large formal dining room occupied the ground floor of the 1923 addition. Frank did not stop there. In 1931 an extensive interior renovation was carried out, including the creation of a large ballroom capable of seating seven hundred within the former Arlington building, a new coffee shop, and new lobby. When all of the work was completed the hotel offered two hundred guest rooms and some of the finest dining and banquet facilities in Southwest Michigan.

The hotel struggled later in the Great Depression. The unprecedented economic downturn devastated the hotel industry nationwide, with countless hotels going bankrupt. Gazette accounts document mortgage foreclosure proceedings, possibly the result of expenses incurred from renovations, which forced a reorganization of the business in 1939. Afterwards Frank Ehrman was still listed as the hotel’s manager. However, Frank died in February 1942, and following his death, the Ehrman family’s long association with the Columbia came to an end.

After Frank’s death, the Columbia was sold to and operated by John Tuberty for much of the remainder of the decade. Tuberty sold to a Tennessee-based hotel chain in 1949. This started a trend. Going forward, the Columbia went through a series of out-of-town owners. The family-run nature of the business, that had characterized it for so long, was gone.

Ownership changes aside, Kalamazoo’s downtown hotels enjoyed a brief golden age on the heels of the Great Depression. Nationwide the hotel industry saw a boom during the Second World War, a boom that continued into the immediate post-war years. Hotels, the Columbia included, adapted to changing taste through redecorating programs, the installation of air conditioning, televisions, and providing parking facilities. But they maintained their position as centers for community life.

Perhaps as a testament to the Columbia’s popularity, it is said that during the 1960s and 1970s Elvis Presley made the hotel his headquarters whenever he was in town. Even today a room on the second floor has been set aside as his office, officially listed as such on the building’s directory. The room is furnished with Elvis-related memorabilia.

By the 1960s the popularity of downtown hotels was fading. Railroads had been replaced by interstates and increasing numbers of travelers preferred the new and more convenient roadside motels. As the 1970s came to a close all of the Columbia’s downtown rivals had shuttered. The Columbia held out into the 1980s by operating very differently than it had in the past. Rather than catering to nightly guests and railroad travelers, the hotel mostly housed fifty-five low-income senior residents who rented rooms on a weekly basis.

On 13 January 1982 it was announced that the Columbia would cease operations. The hotel’s owner, Topper Johnson, cited a need to repair damage to the fifth floor caused by a fire the previous October. It was claimed that the required renovation work was so extensive that it would be impossible to carry out with the building occupied. What made the closing especially problematic is that it left few alternatives for the hotel’s low-income residents. The Columbia was the last affordable housing option of its kind in the city. Local agencies, such as the Ministry with Community, struggled to find new homes for the displaced. After the Columbia was vacated, the proposed repairs never took place and the building sat empty for the following three years.

Happily, the Columbia was spared the wrecking ball. In 1983 a group of local investors formed the Columbia Plaza Partnership and purchased the building from Topper Johnson. Two years later the group began work on an extensive three million dollar renovation, the end result of which transformed the old hotel into a first-class office building named the Columbia Plaza. Virtually the entire interior was gutted and replaced, with the exception of a marble staircase. A light court in the rear of the building was filled in and made into a showcase atrium.

As of 2013 the Columbia Plaza remains a premier office building. The building received further renovations in 2007 and continues to attract notable tenants. In September 2012 it was announced that the building’s first floor would become the new home of the popular Sarkozy Bakery. The bakery’s former home on North Burdick Street was destroyed in a fire on 24 February 2012. Such recent developments prove that although the Columbia no longer welcomes nightly guests, it remains an important part of the fabric of the Haymarket Historic District and downtown Kalamazoo.

“Spends over five weeks getting out of Europe”