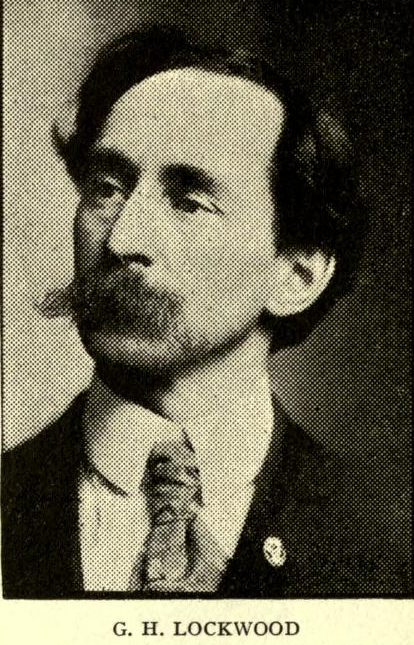 A bold, colorful free-thinker who marched to the beat of a different drummer, Minneapolis-born Guy H. Lockwood was Kalamazoo’s most flamboyant, progressive-era socialist; a unique character who dabbled in publishing, poetry (especially sonnets), politics, house-construction, vegetarianism, and the establishment of the nation’s first correspondence art school.

“Yes, Guy H. Lockwood is one of the remarkable men of our nation and our age…of all nations and all ages! His versatility is astounding! A philosopher and a poet, and a “builder of things with his hands”; as he has builded many houses during his lifetime”–from Candor Magazine, July 1944

Born in 1870 of Irish-Scottish descent, Lockwood grew up in Minneapolis, Minnesota, one of seven children. His father was a mason, a trade the young Lockwood would acquire early on, and one that he would utilize years later while living in Kalamazoo’s Oakwood Neighborhood. Though he became adept at the finer points of building construction, his first love was art, a passion that would see him hone his drawing skills at Dickson College in Illinois. Generally speaking, artistic study and training during the industrial age was aligned with the needs of enterprise, and so Lockwood’s embrace of “fancy penmanship,” engraving, drawing, graphic design and other era-specific credentials positioned him for an eclectic career in publishing and education.

After completing his academic work under the tutorship of G. Walt Wallace, the two men went into business together in Omaha, Nebraska, establishing the nation’s first correspondence art school. After breaking away from Wallace, Lockwood situated the school in Lincoln, Nebraska for a couple of  years before setting out for Kalamazoo. Lockwood first appears in Kalamazoo around 1904-05, taking up residence on Eggleston Avenue, and working for the Acme School of Drawing. An apparent dispute between the head of the company (Dorr E. Wood) and Lockwood ended up with Lockwood leaving in the summer of 1907. A lawsuit over his apparent breach of contract ensued, leading to a court injunction that prevented him from starting a competing art school. An article in the Kalamazoo Telegraph from 13 September 1907 suggests that the dispute centered around the mass departure of students who left Acme to follow Lockwood. Despite the legal problems with Acme, Lockwood would persevere, and a year later, he would once again operate his correspondence school, this time, under the name Lockwood-Stoltz School. Sam Stoltz was a former student of Lockwood, but departed for Chicago, leaving Lockwood as the sole proprietor of the school.

Lockwood’s art school and publishing activities, listed in city directories, went by several names over the years. Sometime around 1919, he built a three-story, 4000 square-foot school along Parkview Avenue, which would later come to sit next door to his 2629 Parkview Avenue residence. This school building was demolished in 1979.

In a 1926 profile of Lockwood’s business and artistic activities, the Kalamazoo Gazette described his school as “ideally located…It is situated on a knoll that overlooks Oakwood lake and the surrounding woods. Students may well gain inspiration for their art studies from the beauty of the vicinity.” Also, “The school itself is capable of caring for 25 resident students and an unlimited number of correspondence course pupils. The rooms are well adapted for art study, and at the top of the house is a mirador where students may contemplate the landscape for miles about.” Over the years, several young cartoonists polished their craft under Lockwood’s tutelage, including Clare Briggs, Herbert Johnson and Robert Ripley (of Ripley’s Believe It or Not! fame).

Lockwood was a long-time political advocate of socialism. In the early part of the 20th century, he contributed cartoons to the Workers’ Call, a newspaper published in Illinois. One of the more audacious expressions of his view that labor should be organized for the benefit of society, and not for excessive profiteering, was his cross-country wagon campaign of 1898. Traveling from town to town between Tennessee and Chicago in a covered wagon, Lockwood and his companions lectured crowds on the benefits of socialist policies and positions. He sold his cartoons and caricatures along the way to finance his trip.

In 1912, along with fellow socialist Byron Van Blarcom, Lockwood was elected to the city council. Their successful campaigns mirrored the local working-class dissatisfaction with the Democratic and Republican parties, both of which were deeply connected to the ownership class. The socialist candidate for mayor the same year, William T. Curry, lost to Charles B. Hays, despite winning an impressive twenty five percent of the vote. Lockwood served only one term as alderman before running for mayor in 1914, losing to incumbent Alfred B. Connable. During his time on the Kalamazoo City Council, Lockwood took his fellow commissioners to task when he felt that policies were not positively impacting the working class. He once criticized the automobile as a “gilded chariot of the rich”. In 1928, he unsuccessfully ran for governor of Michigan on the Socialist Party ticket. Throughout his life he was committed to the lecture circuit, discussing with audiences his views on art and economics.

Why the local interest in socialism? The socialist presidential candidate Eugene V. Debbs spoke to a rally of supporters in 1910 at Oakwood Park after being denied a permit to speak on a Sunday at a city theater. Several local labor disputes, including strikes at the Kalamazoo Corset Company and at the Lilienfeld Cigar Company during this time period also fueled socialism’s brief spike in popularity. And while socialism’s local attractiveness waned dramatically over the coming years, Lockwood remained committed to its ideals and goals, publishing the illustrated pamphlet The Prophet and the Ass (later renamed The Billy Goat), his most politically-charged publication.

Lockwood’s commitment to his ideals extended beyond the printed word when he challenged a local ordinance that prohibited the assembling of large numbers of people on street corners. In 1906-7, after writing to then Mayor Thompson with a request to accommodate Lockwood and a large gathering of socialist activists who planned to meet at the corner of Water and Burdick streets, Lockwood rejected the mayor’s counter-request that the meeting be held at the Haymarket building. Police were distributed throughout the peaceful crowd of socialists when Lockwood, playing the role of martyr, peacefully surrendered to officers, who arrested and jailed him overnight.

Lockwood’s inexhaustible output as a writer of not only poetry (over 5000 composed sonnets), but of novels and essays is well documented in the archival collections of both the Kalamazoo Public Library and Western Michigan University. It was his efforts as an editor of periodicals that explored politics and art that greatly amplified his name nationally. Many of the prolific writer’s works were not published during his lifetime. Lockwood’s printing press was located in the school building.

In 1922, Lockwood married Hazel Hill, who served as business manager of Art and Life Magazine. The magazine was described by the Kalamazoo Gazette in December of 1926 as a magazine “full of attractive pictures, advice to budding artists, and very readable bits of philosophy written by the editor.”

The Prophet and the Ass, editor

The Search for a Lost Soul

The Story of the Great Gold Mine

The Last March on Washington

A New Philosophy of Living

The Soldier and the Billy Goat

Unity, The Giants and Their Tools

Early on his life, Lockwood apprenticed with his father, learning the basics of masonry, which led to his engaging in several home construction projects in the Oakwood Neighborhood, including both his art school and home residence. Lockwood built five homes along Madison Street and Parkview Avenue: 2715 Parkview (1932), 3220 Madison (1937), 3303 Madison (1922), 3219 Madison (1921), and 2629 Parkview (1920). The two homes facing North along Parkview Avenue are made of large stones.

Before Lockwood built his home in the Oakwood Neighborhood, he resided at 122 Main Street (currently occupied by The Radisson Plaza Hotel). Completed by hand around 1923, the home’s facade includes a stone porch and chimney, arched windows and a hipped gable roof.

Lockwood’s poetic telling leading to the construction of the Fieldstone House: “And, finally there came a time when he could cease his wandering life, for his work led him to new fields, the star of hope was still bright and life seemed to now offer some recompense for the homeless days. And then a piece of God’s green earth became his very own, and thereon he builded a beautiful home, and he knew every stone in the wall and every timber in the building and every shingle on the roof, for with his own hands he placed these together. And as he builded he sang, for now, at last, he was to have a dwelling place on earth: and a bright fireplace was to shed out into the night, from his own window, a ruddy glow to welcome his homecoming.”–Art and Life Magazine, January 1925

“A Varied and Interesting Life”

Despite his wide-ranging interests and talents, which led to a long and fascinating life devoted to lofty ideals and to the education of others, Lockwood remained humble, reiterating the value of the work, rather than focus on a discussion of the artist.

“Although Lockwood has accomplished the deeds of 10 or more ordinary men, he is modest and humble. It is difficult to get him to talk about himself. He is perfectly willing to talk by the hour on moral principles, philosophies of life, poetic structures, beauty in nature, or kindred topics in which he himself is not involved. But he is hesitant about discussing about the many things he has done. His own philosophy is ‘”that it’s not what’s done but what is doing that counts.””–Kalamazoo Gazette, December 5, 1926

Lockwood was married three times: probably an early marriage to Theodicia (surname unknown) that we have been unable to verify; to Anna (Annie) Grigsby (1898-div. 1919); and to Hazel Hill (1922-1947). Lockwood passed away in his house 28 September 1947 at the age of 77. He is buried with Hazel at Lakeside Cemetery in Colon, Michigan.

“Lockwood Goes to Jail for Night”

“Kalamazoo’s Municipal Election of 1912: Socialism in One City”

“A Dream House Built with Hands of Love: In a World Where Dreams Come True”