Walk-up boxes are located in the southeast corner of the parking lot.

2022 Summer Reading Challenge
Read Along!
So You Want to Publish

Often people ask if the charming building on Portage Street was originally a church. Children call it “The Castle.” But the boy on the copper weathervane has been quietly reading his book atop the Washington Square Branch Library since the summer afternoon when it first opened in 1927.

Library service to what was then known as the South Side began in 1910 when a branch library was opened in the basement of the old Portage Street School, between Lay and Lane Boulevards. When the school became overcrowded in 1919, the branch was moved to a store building at 1348 Portage Street. There the use of the library doubled, so a new building was planned. Some people wanted the new branch to be located near a school, others in a park, but Miss Flora Roberts, who was then director of Kalamazoo Public Library, prevailed upon the Kalamazoo Board of Education to select a site following the trend of locating libraries near shopping centers.

The only lot that was available near the Washington Square business district was an irregularly shaped one on the edge of the celery fields. This was purchased by the board in 1923. Miss Roberts worked closely with local architect M. J. Billingham to design a building that would fit the lot, meet the requirements of good library architecture and serve both adults and children. That the building is still in use, essentially unchanged, more than three-quarters of a century later, is a tribute to their vision.

A Place of Charm and Delight

The building, of old English design, is made of tapestry brick with limestone trim and two-toned slate on the gabled roof. The interior features oak woodwork, decorative panels, small-paned leaded glass windows, and three open fireplaces. Rough timbers outline its steep ceiling. The front wing houses books for adults, the back wing serves children. Both wings can be supervised from the charging desk, which occupies the center space, along with staff offices. The lower level provides a public meeting room and space for book storage. From the beginning it was praised locally as “a place of charm and delight,” and received national recognition for the efficiency of its design.

The branch opened its doors on 29 August 1927. The first patron to check out a book there was Rev. J. R. T. Lathrop, who borrowed Girl Scout Short Stories for his visiting granddaughter. In the three months between the opening and the November dedication, circulation of materials at the branch increased 50%. 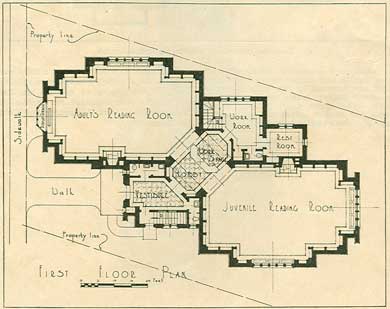 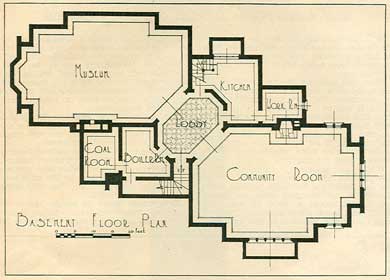 The Greening of the Square

In 1977 the staff celebrated the branch’s 50th anniversary with an open house attended by more than 200 people. Miss Marian Schrier, former head of the branch, was the special guest, and at that event became involved in the initial discussion about a project to beautify the grounds. A local landscape architect, Mr. Peter Rohrer, volunteered to draw up plans for future landscaping. Miss Schrier died in May of the following year, and the Greening of the Square was begun with a fund established in her memory. A flowering tree was dedicated in her honor, and yews, viburnum, and Oregon holly were also planted on the grounds. For some years, the Grow and Show Garden Club cared for these plantings.

The realization of a long-term goal occurred in 1984 when the Board of Education purchased nearly 80,000 square feet of additional land surrounding the library. This has allowed for construction of a new parking lot, reconstruction of the site to eliminate flooding problems, and additional landscaping to enhance the building.

A Fixture of the Edison Neighborhood

In its early years, the branch’s meeting room provided a venue for neighborhood wedding receptions, union meetings and church services. More recently it has hosted Girl Scout and Brownie troops, and neighborhood association meetings. And, of course, it has long offered a full range of programming for patrons of all ages. For its size, the branch also provides significant technology to its patrons, offering word processing, Internet, game, and Spanish language computers. Over the years, the area has become home to an increasing number of Spanish speaking residents, so the staff works closely with the Hispanic American Council to provide appropriate service to them. It also participates in the Edison Neighborhood Weed & Seed program, and in the planning for the restoration of the area as an attractive gateway to the city.

For more than 75 years, the branch has been a welcomed and welcoming fixture of the Edison Neighborhood.