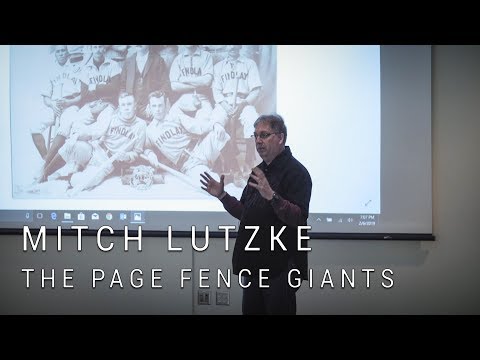 Author Mitch Lutzke
The Page Fence Giants, an all-star black baseball club sponsored by a woven-wire fence company in Adrian, Michigan, graced the diamond in the 1890s. Formed through a partnership between black and white boosters, the team’s respectable four-year run was an early integration success–before integration was phased out decades ahead of Jackie Robinson’s 1947 debut, and the growing Jim Crow sentiment blocked the Page Fence Giants’ best talent from the major leagues.

Author Mitch Lutzke talks about how he pieced together the history of this all-star team that came into existence as a marketing tool for an Adrian, Michigan fence manufacturer and went on to win a world championship. Lutzke’s book, The Page Fence Giants: A History of Black Baseball’s Pioneering Champions, tells the the story of a long-ignored team at the close of the 19th century, whose Hall of Famer second baseman Sol White was but one of their best players. The story of the Page Fence Giants black baseball team had been hidden away for over a century, but has finally been revealed.

Presentation was captured on February 6th, 2019 at Kalamazoo Public Library